It was an absolute scorcher yesterday and needless to say I spent some time swimming in the river. I was lucky not to come across a group of HS2 workers dressed in their bright orange fluorescent jackets, white helmets and steel capped boots who came sneaking onto Blackgrounds Farm from the Culworth footpath. They then left the footpath and walked down to the River hut and one (who was the boss as he was wearing a black helmet) started to take photos. The guest who was 'in residence' asked them what they were doing and whether they were HS2, which they admitted. He asked them to leave as his wife was sunbathing. HS2 are not supposed to go on any land without previous permission with dates and times being confirmed. We wouldn't have minded at all if they had asked. Anyway, the funniest part was that when our liaison officer was questioned he denied all knowledge of any HS2 men at Blackgrounds. He then phoned up twenty minutes later to say that he had checked with all the HS2 gangs in the area and they had all denied being anywhere near Blackgrounds so " They must have been dressing up as HS2 men"!! So, on the hottest day of the year six fully grown men decided to dress up in fluorescent jackets, helmets and big boots to pretend to be the most despised people in the district??!! Hmmmm. I think I smell a rat here. Sadly it doesn't surprise me what depths they will go to and how there is absolutely no honesty or integrity within this evil company. They were obviously trying to get proof that we were continuing our shepherd hut business to report back to the 'bosses' - Mr Michael Eckett and James Tyler Morris. Well guys, of course we are still running our businesses, because unlike you we actually have to earn a living and we don't get paid by the tax payers to intimidate and bully decent, honest people. We will continue to run our shepherd huts until you actually pay us for the businesses which you have 'acquired' .
Rant over - Today is going to be much cooler, thankfully, although as much as I love the sun the heat and the flies on the horses were pretty unbearable. We have started to bring the most affected one's in during the day. I was going to  bring the horses in earlier this season but cannot bear the thought of riding when there is still so many flies around, so may leave it for another couple of weeks.
We had some people round for supper last night and ordered yummy Fish and Chips take away from the Carpenter Arms - No washing up and very relaxed.  Perfect Result. That is definitely the way forward!
Posted by Pauline at 02:14

We went to see Sam, our three year old youngster yesterday morning at Jamie Goss's. Jamie has been breaking him in for the last six weeks. He was having his first canter and Jamie wanted us to see him work. He went beautifully and Jamie is delighted with him. He has done enough now as he is such a big boy so he came home to us and I rode him this morning before turning him away in the field with his friends. It was wonderful to ride him and strange to think that I used to race ride his Grandmother, Supreme Dream - We had four amazing wins together against all the odds as she was tiny - just over 15 hands. Supreme Dream only had the one foal before she sadly broke her leg in the field, and that was Velvet Dream, an enormous lump of a horse by Alflora, who although not fast enough to be a racehorse was the best hunter I have ever sat on. She only had one eye but could see a stride from a mile off.  As I have already mentioned on this blog we very nearly lost Sam and Dream during his birth and it was Sam Burton who saved their lives hence his name 'Saved by Sam' - he is very special to us and I'm very excited about his future as he felt like a proper horse this morning.

Things seem almost normal here since the outbreak of the virus, even though today is the first day that it is compulsory to wear masks in shops..
The shepherd huts are humming with them all full and mostly with returning customers. It is great to be able to welcome them back after such a long lock down. Ironically, on Monday we had an email from a 'Fat Cat' High Earner who is head of acquisitions for HS2, a certain Michael Eckett, who demanded that we stop receiving guests "With immediate effect" as HS2 have 'acquired' our businesses. So - this public servant who is getting paid a ridiculous amount by ourselves as tax payers, has the audacity to tell us that we are no longer allowed to earn a living because they have "acquired" our businesses even though they haven't paid a penny for them!!??  Unbelievable. We also know for a fact from a very reliable source that HS2 will not be needing the land at Blackgrounds farm for at least 9 months. This proves what a spiteful, bullying, cruel and corrupt organisation HS2 is and not surprisingly we are going to continue running our business as before.
We had a lovely day on Wednesday with the little 'uns, Jessica and Henry and their Dad and Mum Joseph and Sophie.  Lovely to actually see them again after such a long time.
The foals are growing like weeds and give so much pleasure. They are terrible time wasters. 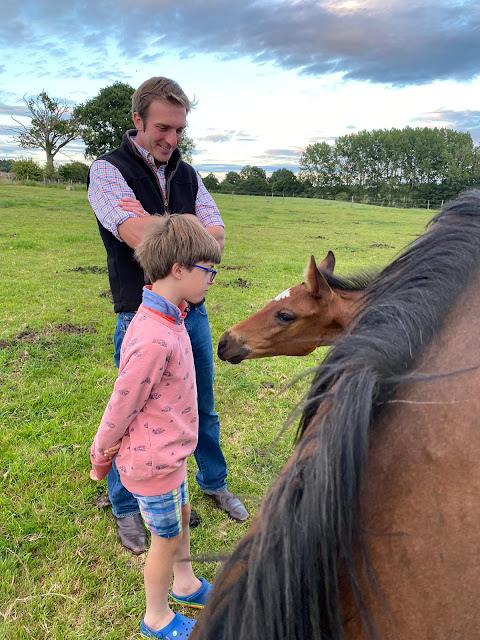 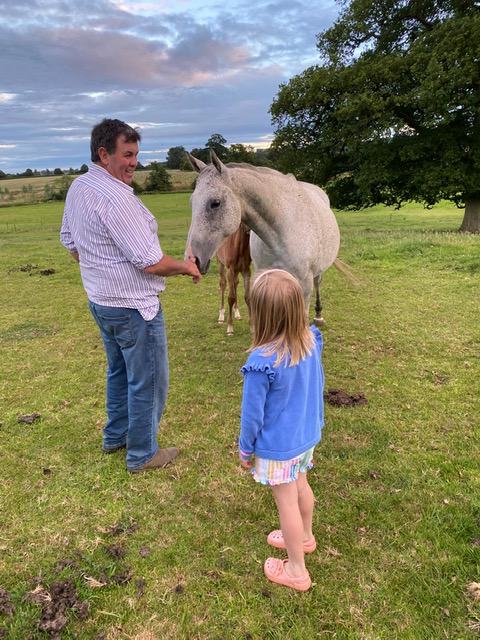 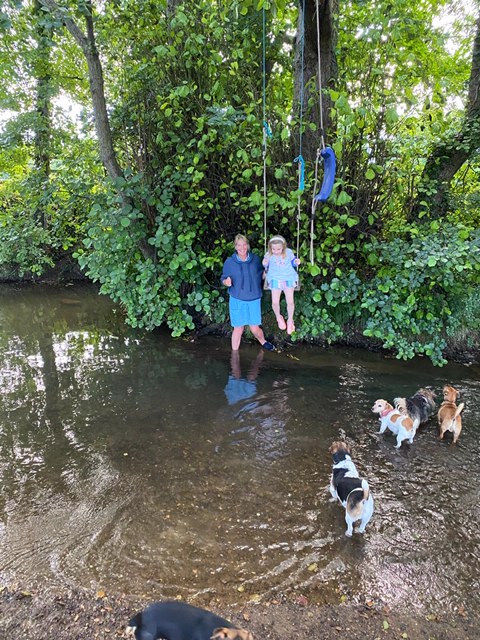 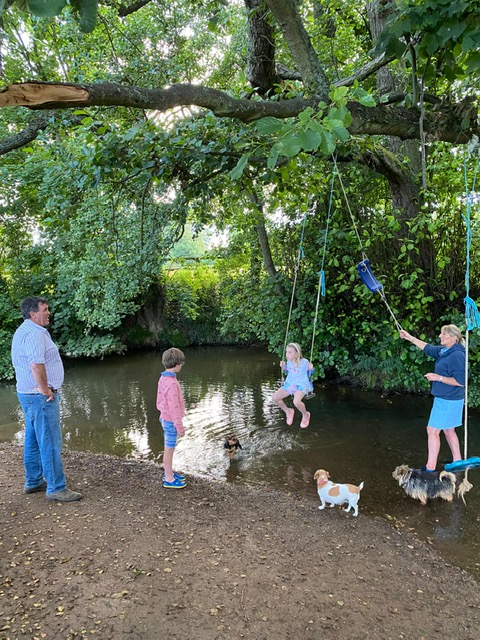 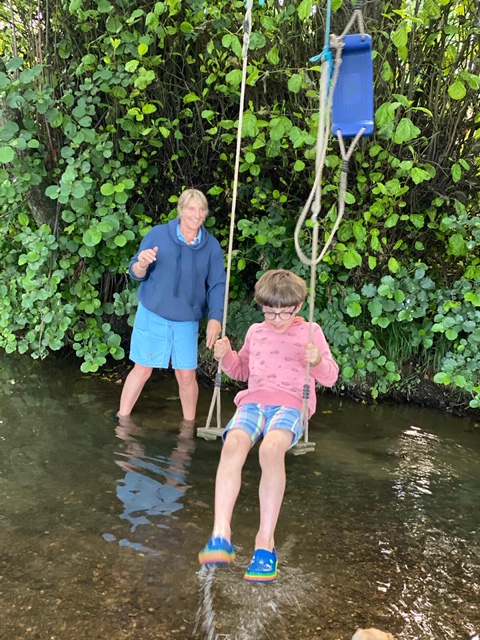 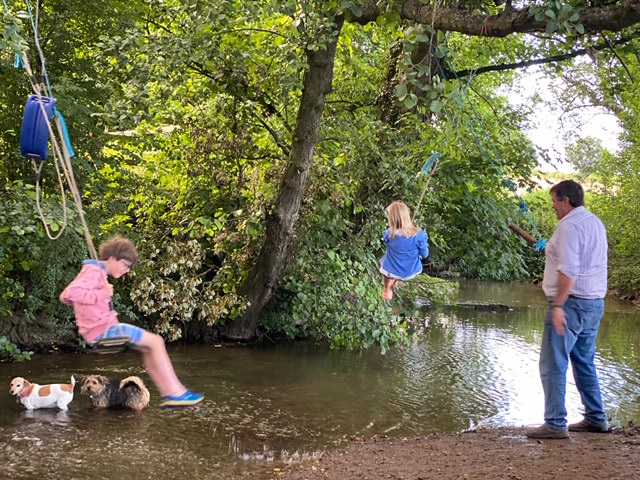 Murphy (Glory Hunter) has found a forever home with Amy from Gloucester. She has got him on a three week trial but has already contacted me to say how well he has settled in and how chilled he is and how much she likes him. I am delighted as he was a special boy to me as he was rather quirky and I enjoyed the challenge with him but was worried about whether he would fit in anywhere else. So, that is four of my lovely boys - Budge, Kingsley, Ted and Murphy who have found wonderful forever homes. Budge went to Claire Shuckburgh who absolutely loves him and is going to do little events with him as well as team chasing. I hate parting with horses and want to keep them all but there is a limit I guess....

Doctor Kingsley went to Roy's today for his Summer holiday - Popaway normally goes but because she has a foal it wouldn't be fair for Roy to have that responsibility so he has got the pleasure of Jake to keep his horse, Billy company. Roy has just phoned to say that Jake is really settled and has made friends with Billy, so all good.
On Tuesday, the vet came to sketch the foals, take blood and chip them. They are getting rather large so it was all Doug could do to hang on to them, but it went surprisingly smoothly. The two girls were probably the naughtiest with Bertha squealing like a pig and Bubble leaping and fighting against being restrained but all done now.
Posted by Pauline at 13:27

As we have got some lovely youngsters coming along and we are somewhat uncertain about the future with HS2 I have been advertising our not so fast 'racehorses' for rehoming and have found wonderful 'forever homes' for Kingsley and Ted Thistle. Kingsley has gone to a lovely girl called Anna from Shropshire and Ted has gone to Amy from Surrey - They have already contacted me a number of times to say how delighted they are with them and how well they have settled in. It is so rewarding to find such good homes for them and to know that they have a home for life.﻿﻿﻿﻿
﻿

We have just one more to find a lovely home for, and that is Murphy (Glory Hunter) He is slightly more complicated as he is more 'race horsey' in that he is more highly strung. I love riding him though as he is nicely forward going. I had two awful horsey girls come to see him yesterday and I have to say I took an instant dislike to them - They came dressed to the nines in their jodhpurs and shiny riding boots (all the gear and no idea) asked some really 'clever' questions in a sneering way and then refused to sit on him! I ended up riding him around the field in my wellington boots - I found it highly amusing that they were half my age and hadn't had new hips and knees (as I have)  and yet they were too scared to get on. As it happened he behaved like a lamb but I didn't want them to have him and told them so. I think I may have mentioned to them that I thought they were 'Wet'. A little Tourette moment..
﻿﻿

Oooops - |It's been a while since I posted but everything is fine and really not much has happened. I thoroughly enjoyed the hot weather and after doing 'chores' (what a strange word) I then spent rather a lot of time in or by the river. Bliss...
Roy, Carol, Rachel and Steve came to visit the foals yesterday - Even if I say so myself they all looked unbelievable. We are so privileged to have such beautiful animals here. We had a bottle of bubbly in the shepherds hut to celebrate. Any excuse. They are great timewasters. Another reason now to put more photos of foals up - sorry if I am boring anyone.

﻿
﻿
We have got a magnificent display of poppies in the next door field. It was supposed to be oil seed rape but because of the dry weather the crop has failed and the poppies have taken over. Absolutely beautiful with the downside that they are attracting people from all over the place - with a few weird ones... One gentleman knocked on the door to say that he was a wildlife photographer and could he park in the yard whilst he took some photos of the poppies and also his speciality, dragon flies. He then offered to take some photos of the mares and foals - He didn't mention that he had a dark haired girlfriend waiting in the wings and they spent the next two hours deep in the poppy field with her posing with very little on! Needless to say I don't think there were many photos taken of dragonflies or mares and foals...
The other somewhat strange visitors were a very large group of Indians who ended up having a lovely picnic on our table right outside our house, whilst the children played in the garden and part of the group went into the shepherd hut... When they were questioned they said they could do what they liked as it was on the footpath. It isn't actually and they were eventually sent on their way. Quite extraordinary but also funny!