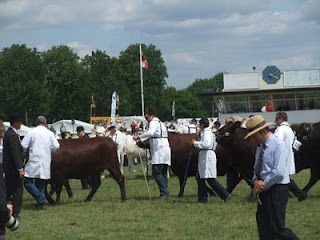 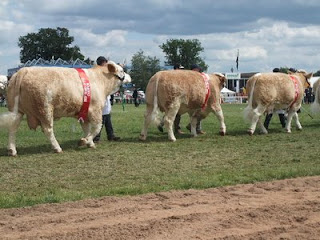 The last Royal Show
A very sad day. The Royal Show has been going for 160 years and was always known to be the show. It had the highest of reputations and was the showcase of British Agriculture. I have very fond memories of the Royal, having had the honour of judging there and having been lucky enough to have won the Supreme Championship with three different British Belgian Blue bulls.
It has been totally mis-managed by the bowler hatted committee who are completely out of touch with the farmers, exhibitors, trade stand holders and the paying public. Nigel Hollick, a well known and much respected farmer was on the committee and has been calling for changes for the last seven years because he could see the writing was on the wall. Sadly, he was a lone voice and the inevitable but unthinkable has happened.
I am only just getting over jet-lag. It has been such a hectic week socially, with a 21st party on Sunday, out with friends on Tuesday, Doug's relatives (from Dubbo, in Australia) staying on Wednesday and Thursday night, that I just haven't caught up and have been feeling pretty awful. Hopefully, we can rest up a bit this weekend - although we have got another 21st/50th tomorrow night. Early night tonight - so that's me signing off as I've got to walk the dogs first!
Posted by Pauline at 12:45