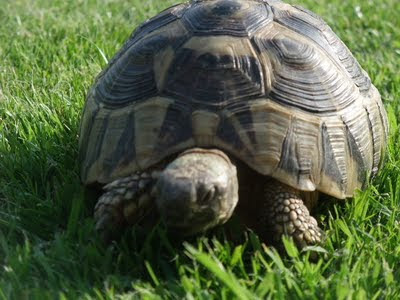 Toby.
Jay's tortoise, Toby, has definitely got nine lives. Yesterday, we got a phone call from Hamish, the new farm manager to say that he had just run over a tortoise on the track heading towards 'the big house' - about a mile away. Luckily, his wheels hadn't gone over the top of him and he was brought home unharmed. Toby was bought for Jay when she was ten years old and he was nine months. He was about the size of a 50 pence piece. Jay used to take him out in the garden at 'Westlands', where we used to live, and let him wander around while she was under strict instructions to keep an eye on him. One day, Toby was getting his daily exercise and the phone rang, Jay went to answer it and sure enough when she got back Toby had disappeared. The gardens at Westlands covered about two acres and had a number of ponds, lots of trees and shrubs. It really was like looking for a needle in a haystack. Jay had no idea which way he had gone and as the garden was surrounded by fields, he could just as easily have gone through the fence. Two hours later we were still looking but had just about given up as we didn't know where to start. Doug then got home from work to be greeted by a sobbing Jay - he went down to the bottom garden and within ten minutes came back with Toby who was just in the process of being almost completely buried in soil under a group of trees. he wasn't visible unless you got down on your hands and knees and got under the lower branches. Quite astonishing that he was found - Doug earned a lot of brownie points with that one. Anyway, that was Toby's first adventure. His next big one was eight years later when we were preparing to move from Westlands to Blackgrounds farm. Toby was pretty much free range around the house at this stage as I hate to see anything caged up. To get out he had to climb quite a ridge over the doorstep and up until then hadn't really bothered. In early April of that year it suddenly occurred to me that I hadn't seen Toby for some time. I searched the house and sure enough he had gone. We hunted around the garden around the same spot as before but no sign. We didn't have to vacate Westlands until September and during that time did dozens of trips backwards and forwards with the trailer moving all our worldly goods. It got to our last week at Westlands and Toby still hadn't been found. Jay was very upset but had accepted that this time he most certainly would have fallen in one of the ponds or been combined in the adjoining fields. On our last day we were picking up the final load, I got into the truck to drive away, and there was Toby walking towards me in my wheel tracks. I just could not believe my eyes. He had obviously decided he didn't want to be left behind after all but how he avoided being run over was an absolute miracle. And now to the present day..... Well, we thought our garden was 'Toby proof' as it had dug in chicken wire all the way around and from early April Toby had been in and out of the garden and house without even looking as though he was going to make a break for freedom. For whatever reason two days ago Toby somehow managed to dig down a foot and get under the fence, we are obviously not good enough for him now as he was heading towards the big house with the lovely lake. All around our house the fields are full of crops, just about to be combined and luckily for Toby he kept to the side of the field and was picked up be Hamish who thought he was seeing things! Toby is now confined to barracks until the fields have been combined and we have re-secured the fence. We may find him a 'Tracy'.....
A good day in the office today with lots of orders. Dad, Mum and an old family friend Eileen came for tea, and had a little walk. they loved the shepherd's hut and I could see Dad's mind working as he was considering it as an ideal bolthole where he could get some peace from household chores.
We have had a great weekend with supper at Lou Bates on Saturday (home at 3 am) and then a farewell drinks party for the Pytchley Masters on Sunday evening where there were about 300 farmers/ country people - feeling somewhat jaded now and off to bed.
Posted by Pauline at 13:31