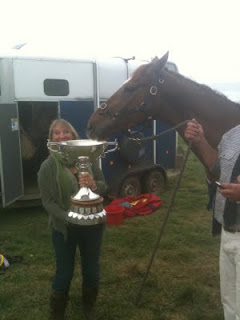 After much indecision we ended up taking Jake to Dingley as our local track (Whitfield) was too firm.

Really rather tense as we knew he would run a much better race at Whitfield as he loves that track but we just didn't want to risk him and we knew that on a track where he hasn't run before he is always hard work, and as expected he was really hard work, virtually pulling himself up every time he went past the horseboxes and just being basically stone idle - Will did a brilliant job on him by keeping him interested by seeing the front and making sure that he didn't lose too many lengths when going past the horseboxes - he got to the front possibly too early (four from home) but had no choice as he couldn't let him back off for one moment, and he got the monkey (who had his ears pricked and was thinking about pulling himself up) past the winning line in front by three lengths. Myself, Lucy and Doug went whooping down the hill to greet him, much to the amusement of the crowd who couldn't quite understand quite why it was such an achievement....Frustratingly he got fined by the stewards for use of the whip, which in this case was a little unfair as Jake can take the 'mickey' and needs to be woken up otherwise he would have happily taken himself back to Harry who was in the horsebox park waiting for him. He wasn't even slightly tired and not one tiny bit distressed, but I can understand why, in this day and age of 'political correctness' the stewards have to take this stand, but it should be done on an individual basis and not just a blanket fine. The jockeys get fined for not trying and then for trying too hard. Very difficult for them.

Anyway, apart from that we were over the moon and we have won back the big cup that Harry (Unoitmakessense) won last year. Happy days!!
Posted by Pauline at 14:11