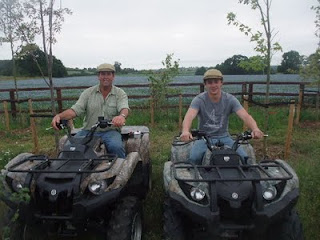 Doug and his nephew, Max Gubbins, having a 'flat cap' moment
Max came to stay with us for a couple of days. Doug last saw him in Australia 11 years ago and didn't recognise him. He has grown into a fine young man and was an absolute delight to have around, even though he did take the mickey out of Dougs English farmers flat cap - which is why Doug made him wear one too!
In the evening we had a few beers in the garden and then cycled to the pub, had a steak and then wobbled back. A great night. The following day Max helped Doug with his work until the late afternoon when he had a train to catch as he was going to see his Aunt in Ascot (his mother is English) He wants to come back in the winter and help with the racehorses, and even wants to have a ride in a point to point...(!)
Last evening we went to watch The Pirates Of Penzance at the open air theatre at Kilworth House. It started at 5.30 pm with a meal in the massive log cabin, there was a group of 65 of us, all organised by Ann Jones, I was feeling a little jaded after a long day, and have to admit that I thought I would be asleep by the second act, but I was pleasantly surprised and ended up really enjoying it, I love the fact that the theatre is outside and set in the most beautiful surroundings, It's not claustrophobic and too warm like most theatres. The performance was superb, very cleverly done, and I am now, surprisingly, quite a fan of Gilbert & Sullivan.
Today I caught up with my office work and then whizzed off to get some curtains organised for the shepherd hut, as it gets light so early, I thought that we could push the boat out and get some curtains made. Those people who stayed on Saturday still haven't paid. Grrrr! However, all our other guests have been really lovely and we have been lucky not to have had any bad payers before.
I am watching The Apprentice now. Bye Bye.
Posted by Pauline at 13:37