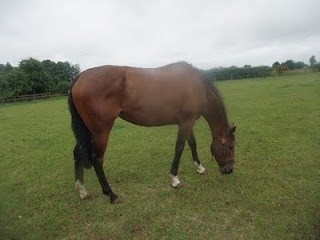 'We Never Give Up' has arrived! 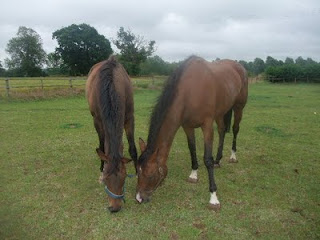 She arrived first thing this morning, (and yes, we were still in bed!) She looks great - plenty big enough and very athletic looking. She has got a white triangle on her nose which is quite distinctive and once we had put Leon in the same field as her she settled really quickly - Doug took her back shoes off and she was perfectly behaved. What a relief - I don't like buying horses unseen but I had heard that Pat was dead straight and so far, everything he said has been right. She looks as though she could go out and do the job very nicely indeed. We will have to think of a stable name for her.
The ball was brilliant last night - the marquee was massive and there was a live band and a disco, the food was great and they would have made a lot of money in the auction. All local farming people and a fantastic atmosphere - It went on until 4 am in the morning and was still pumping when we left (very sensibly) at 2.30 am
Next time I do a posting we will be in Australia - we will be leaving at 5 o' clock this afternoon for the flight which leaves around 10 pm so plenty of time although I still have so much to do - Must go and water my tomatoes!
Posted by Pauline at 02:57