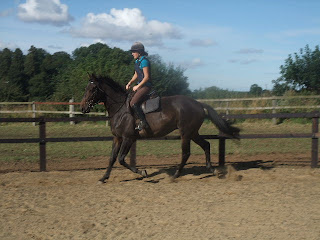 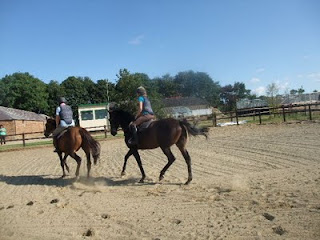 This week has flown by - we have broken the three hooligans in with Lady Gaga being stroppy until the last day when she softened up to a degree, they will be going back on Thursday, with Subo staying as payment - Eeyore, although he would rather not go around the menage behaved and went really well when we rode him around the farm, Dolly was lovely but has got a wolf tooth which is clearly causing her some pain so we have got the dentist booked for this Friday to remove it, Cloud went beautifully today and will start jumping in the next couple of days.

On Friday evening we picked up Intimate Whisper and were really pleased with her when we saw her again - her owners want to have some fun with her pointing this season, and she has got the breeding to do that and more.

As we are so short of grass we have moved Leon and Jessie (We Never Give Up) to the field we took hay from, it's a bit of a risk as it is full of rabbit holes but they are both absolute pigs and probably won't gallop around too much. The field is the other side of the river, so I popped over to see them this evening and had a swim on the way back - they are both fine and haven't lifted their heads since they were put there.

We are going to York races tomorrow as we have been invited by some clients who have got a box there who we sold a heart monitor to - We're staying over with some friends, Stuart and Susan, who live in York and then back on Thursday. Really looking forward to it.

Now I know this should have been my first posting but as it was announced a couple of days ago, and we had the excitement then, I hope that I'm excused - Joseph and Sophie are going to have a baby!!! Yes.... that means Doug and I are going to be.... Oh dear..., I almost can't say it, yes...Grandparents....Aaah. I honestly couldn't think of two nicer people to have a baby and we are absolutely over the moon for them. They will be truly great parents.