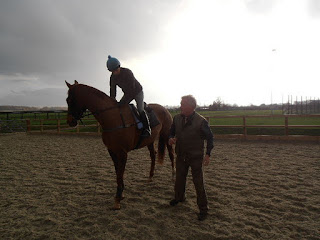 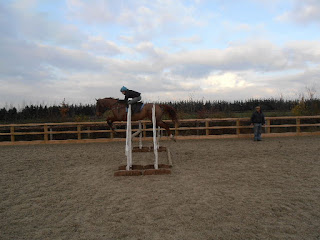 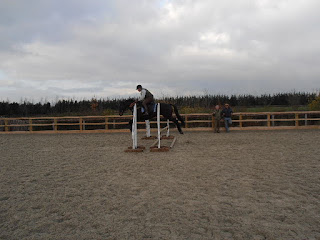 Yogi Breisner with Amy and Christopher - Yesterday Amy and Christopher went to Newmarket racing school where they were taking part in a training course especially for jockeys intending to run in their first point to point. We took Jake and Cyril (Christopher's horse, who we are training) where Yogi Breisner put them through their paces. He is such a good teacher and you can see why he was the coach for the Olympic Event team. He made them jump poles first, correcting them on their position, balance and pace and then when he was happy with them put them over the point to point fences - it was great to see how much they improved and they both benefited enormously from the session - I only wish that I had such a wonderful opportunity before I started racing - perhaps I wouldn't have fallen off so many times!

Amy is hoping to have her first run at Barbury Castle on the 4th December on Haunted House, who Emma Hawthorne has been kind enough to let her have the ride on, and Christopher, who is a little older (like twice as old...) is having his first run at the Burton on the 27th January, on his own horse, Cyril, who he bought especially for the job.
Posted by Pauline at 10:57