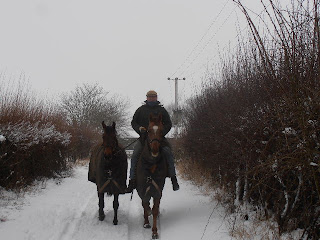 Doug on Jake, leading Harry
The beautiful snow has turned to a nasty sludge today - it makes working the horses impossible as it is too slippery to get anywhere even if the gallops weren't frozen, so they went on the walker and then all went outside to play. During the cold spell we have been giving them their breakfast outside so they have something else to do and don't hoon around and slip over. It is so good for them to be outside and they do a certain amount of exercise which seems to maintain their fitness. They all go out in pairs, and part of the challenge is making sure that they are paired up correctly otherwise you get bullying which can be bad for the individuals self esteem which can then show on the racetrack. A horse has to have confidence and belief to win races and it is all about keeping them sweet so that think they can win - even if more often than not they don't!! So we have Harry with Jake, Laverty with Moonie, Paddy with Aitch, Shade with Oaka, Leon with Jess, Frog with Whisper and Cloud with Dolly. Cyril goes out on his own as he isn't very sociable and chases anyone brave enough to share his paddock.
Turning them all out in the meadows and then bringing them all back in the afternoon is a full time job and somewhat exhausting, but you either have to do it everyday or not at all, as if you just let them out occasionally then they go mad with excitement and end up hurting themselves. Doris is due back home this week and will continue her recuperation in the barn with Dream. Apparently she has been the most perfect patient and the girls at Flawborough Equine have all fallen in love with her.
In between trudging backwards and forwards from the field yesterday we watched the Ireland v Wales rugby match - absolutely brilliant game and it could have gone either way right up until the end. Most certainly a lot better than the English /Scottish game the day before, but hopefully England will improve next week-end as we are going to Rome to see them in action. I have never been to Rome before and will make sure we see the sights as well as the rugby. Really looking forward to it - just hope the bad weather doesn't affect the flights.