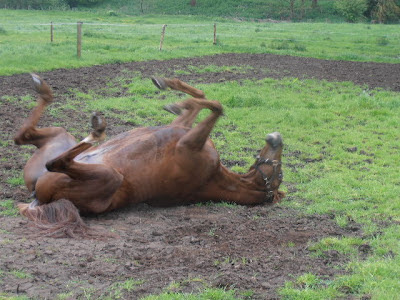 Both Jake and Laverty absolutely fine this morning.
Jake's race was just what we didn't want - a three runner race (as no one wanted to take him on), and both the other horses in the race didn't want to lead. We knew that Jake can be a bit unenthusiastic in front so Pete was told to try and tuck in but it was an impossible task as they were going ridiculously slowly. The opposition had really done their homework and decided that the only way to beat him would be to track him and then have a sprint finish for the line - It was the longest race I have ever watched with Pete trying to lure the other horses to come upsides and then when they did he would just pull away again. Pete was having such fun that he was whooping and hollaring over every fence - three from home the other two really stepped on the gas but Jake was too good for them and just drew away and won by his normal minimum distance, two lengths - he only just does what he needs to do, but he could have gone around again he was so fresh. Photos can be seen on ths link
We were hugely relieved as the only way you can go after a win at Cheltenham is downhill - Also he has never had to race from the front before and this would have given his confidence a huge boost.
If anyone had told me two seasons ago that Jake, this horse who couldn't jump a stick out hunting, who needed blinkers just to school over a hurdle,who was as slow as a boat (to quote Doug "Seriously pedestrian") and who used to throw himself over backwards in fear in the paddock before a race, would go on and win nine races and six on the bounce including a big hunter chase I would have told them that they had rocks in their head... He was also a really horrible horse and had managed to break Ben's (his owner/rider) hand, Ben's mother's leg and Doug's ribs, so we would gladly have given him away but no one would have him. It gives us all hope that if he can come good, any horse can!!
He has now qualified for the Cheltenham Foxhunters - (Who would have thought that?!!) So now he can have a well deserved rest.
Posted by Pauline at 13:11