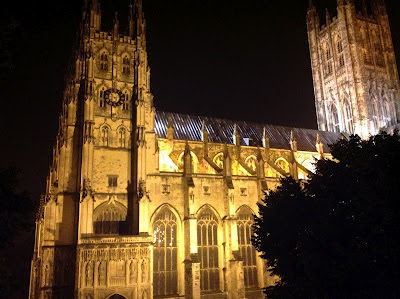 A room with a view
It was Jay's graduation yesterday in Canterbury Cathedral. We booked a room at the Cathedral Gate hotel and the view out of the window was truly awe inspiring. Nine hundred years of history - it was quite mind blowing, and because the gates are closed at night time it was eerily quiet and we felt as though we were the only ones able to enjoy its beauty. Rather a privilege. 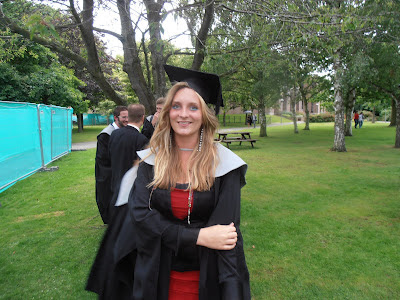 Jay the graduate
We were terribly proud of Jay who has now got her Bachelor of Science degree and got a very commendable two one.
In the evening we went out with Jay's university friends who had all graduated and their parents. It was organised by the students who bought a bottle of champagne for us all and toasted the parents, thanking them for supporting them through university. It was a lovely touch. The other parents were an interestingly mixed bunch, including a Jewish Rabbi with a Thai bride (!), two doctors (both Italian), a UN worker, a masseur for cancer patients who was Belgian, a Shell worker and his wife who seemed to spend most of their time travelling the world and going to music festivals and boring old us...
It seems rather strange that all the children have now finished education. An end of an era.

Due to the bad weather the Henley swim was cancelled last Sunday, but Doug is now doing the Bournmouth Pier to Pier Swim in aid of Cystic Fibrosis, it's a bit further at a mile and a half, so please, if you haven't already (and thank you so much to those that have) sponsor him for a very good cause