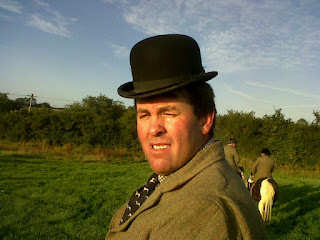 Doug doing a 'Laurel and Hardy' impression!
We have being doing a lot of cubbing lately and one morning Doug forgot his hat so Clarissa phoned a friend who she knew was coming to ask her to bring a big hat for Doug to lend - This was the result - It literally just perched on top of his head and caused an enormous amount of amusement - (He will kill me for posting this photo!)
Apart from the hat incident we have had a lot of enjoyment showing the young horses the hounds for the first time and also rejuvenating the older horses by giving them a bit of fun. Yesterday we had a huge day with an early morning start with the Bicester at Hinton on the Hedges. We took four horses, I was on Jess, Doug was on Button, Laura was on Definite Dawn and Clarissa was on Paddy. It was Definite Dawn's first time out and his eyes were on stalks. He really loved it though and it seems to have given him a new lease of life. Jess was full of enthusiasm and very strong, Paddy just wants to get right in the middle of the action and Button who previously wanted to run away is now getting a bit braver and relaxing nicely.  We got back around elevenish, washed the horses, turned out the others and then by three o'clock we were back in the lorry with another three horses (Red, Jake and Dream) for hunting with the Warwickshire near Paxford. It was a beautiful autumnal afternoon and we had a very pleasant ride around. Dream seems to have got a new lease of life and was acting like a complete plonker - She would charge past everyone and then do a huge squeal and buck, it is astonishing to think that not very long ago she was upside down in the ditch with a suspected broken neck. Lovely to see, but I would have been highly embarrassed if the 'safe schoolmistress' had been successful in her bid to buck me off!  It was just getting dark by the time we got back to our lorry where we loaded the horses up with their hay nets and then went and joined everyone for a pig roast.

It's pouring with rain today, just what we need as the ground has got very firm.
I had to pick up Poppy from the vets yesterday, she had been hospitalised for the last few days as she had become very sick and seemed to be in a lot of pain. They cut her open as they thought she had an infected womb, but it turned out she had a form of gastro-enteritis. She is very happy to be back and she was very much missed but because of the operation it cost over a thousand pounds - Ouch.
Posted by Pauline at 05:48