All set for tomorrow - Ponty has been bathed and shampooed and looks stunning.
He has done a lot of schooling in the past two weeks and jumps like a stag - my only concern is that having had two years off, he may lack core strength and might struggle first time out. He is definitely a horse for the future and we mustn't make the mistake of rushing him.
We still have a lot of water around even though it hasn't rained for the last couple of days, and the day after the horses have had a big piece of work we have been taking them for a paddle in the fields which they love. 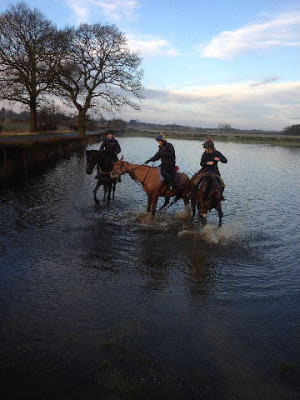 The photo on the right was taken just as Whisper decided that it would be a lovely idea to have a roll, and she was just sinking to her knees. Luckily I managed to change her mind for her - a lucky escape!

We have had a few contributions to the drop pot recently, beginning with Jay's tumble from Ben, yesterday we were trotting back from the round gallop and I was in the lead on Dancer, she spooked at a puddle in the road, and then tried to jump it -I came off, She then found her way home with no harm done thank goodness. We then took some horses to the schooling field and poor Faye had an unfortunate mishap on Paddy who was jumping upsides Dolly, he over jumped and pecked on landing, Faye lost her stirrup but was just approaching the open ditch and she was half thinking about pulling him up, Paddy was unsure of what she wanted to do and he stopped dead, catapulting Faye through the air and into the ditch. She got up laughing and they went again, both staying together beautifully. The drop pot is £20 richer. It looks as though our end of season party should be a good one this year....
Posted by Pauline at 10:07