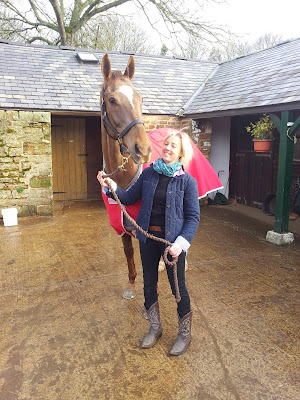 Jake and Laura on their way to Cheltenham

Jake is back safe and well after a tremendously gutsy and courageous effort - It was a gruelling contest with only four finishers and Jake was the last to finish, bravely jumping through horses that had ground themselves to a standstill. He hunted over the last fence and then Pete saw that there was no one else following so he let him canter home in his own time. It was a fantastic effort from both horse and jockey and we were over the moon with 'The Doctors' performance It was a fairly incident packed race and you had to feel very sorry for the poor girl who was riding Oscar Delta as she looked sure to win before it jinked at the tapes and she fell off allowing Salsify to come home in front.
It was such a privilege to be at Cheltenham on Gold Cup day and we had to keep pinching ourselves to make sure we weren't dreaming.
We arrived in good time and when we parked the lorry there was a big crowd of people just watching the horses unload and taking photos. That was when the nerves really started to jangle as it was suddenly very real. We then walked the course which was in great condition. It was quite eerie being over the far side of the course and looking across at the massive grandstand which was soon to be packed to the rafters and listening to the low buzz of excitement gradually building up. We still had plenty of time so we joined some friends for a picnic in the car park which helped ease the nerves. The rain then started to fall quite heavily which in hindsight may not have helped Jake's cause as by the time he came to run the ground was like glue which we know he doesn't like after his Chipley outing. However, he did us all proud and we are so relieved to have him home safe and sound and absolutely full of himself. The team all met up for a celebratory drink last night at the local pub and the villagers were all very excited about his run - A perfect end to a perfect day.
Posted by Pauline at 05:29