Hunting yesterday with the Essex Union was great fun - Jason went on Bryn, I went on Flash and Doug on Harry. We arrived three quarters of an hour early and to our surprise there was already a lot of boxes there but no one around. We eventually found them all having a good old party in the barn! They were a really friendly bunch and when we eventually got hunting it was interesting to see the different country. They had a visiting pack from Lancashire and the hounds were really small and smooth haired. There were very few jumps but lots of ditches which were a bit daunting but our horses did really well. I could hear Doug behind me saying "Harry, Harry, HARRY!!, and then he would come flying by with a "Sorry Master" or do a large circle if we were in a field big enough, It was hilarious but at least we got noticed and there will be no question that Christopher's horses have qualified. It was a six hour round journey so the one day out will have to do.
Here are the photos I took on our lovely week-end in Northumberland - 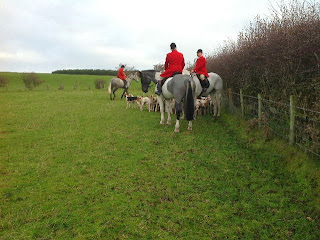