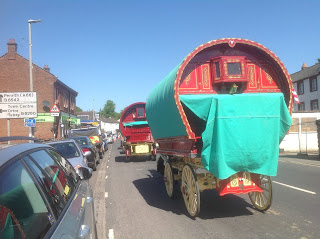 Now I have caught up a bit, I have got some photos of Appleby horse fair which is where I went last Thursday in the vain hope of finding out something more about Spud and putting the word around as we are fairly certain that he has been picked up by travellers.

I probably didn't arrive at the right time but it took a little longer  than it should have done to get there, as I had a complete blonde moment and went to the wrong Appleby!! Yes, I know. I did think there was something amiss when I went through Scunthorpe but was happily listening to the radio and following the sat nav and thought 'they' knew a 'back' way. Besides, I didn't really know where Appleby was anyway except it was up North and also didn't know it was called Appleby in Westmorland. Nevertheless it took somewhat longer than desired to get there and when I did, it was rather late and full of drunks. There were hundreds of people standing outside a pub and I managed to get a parking spot nearby. I was nervous about leaving the dogs (Tattie and Poppy) so made sure I could see the car all the time.There was a rather threatening atmosphere in the air and I have to say I was a little scared.  I put a few posters up nearby. In the meantime the gypsies were trotting their horses in front of carts backwards and forwards in view of the pub which involved a hill on either side. They were clearly trying to 'sell their wares' . One particularly young and tiny coloured pony (no more than a foal) was being flogged up and down the hill absolutely flat out. The driver was shouting and whipping him and by the time he had done the two hills at least twenty times the poor thing had his nose on the floor, his sides were heaving but was still trying so hard to please. The gypsy 'driver' was just turning around in front of me about to go again when I stood in front of his cart and asked him to stop. It didn't go down terribly well and people started to gather around to watch me being squashed no doubt. Luckily the gypsy driver having given me a couple of expletives decided to call it quits. Phew. I have never been so glad to get back into my car and flee to safety to my B&B in Cockermouth. It did however, leave me terribly depressed that such uncaring people could have our lovely Spud in captive.
Having said that, when I went back the next day, somewhat reluctantly, there was a completely different atmosphere. The police and RSPCA were out in force and everyone was very well behaved and whilst giving out leaflets and putting up posters I met some really nice travellers who said they would do what they could to help find Spud. 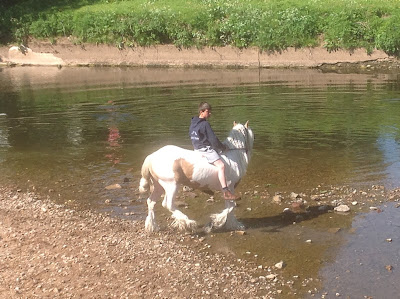 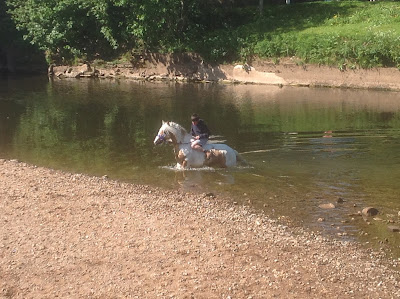 Some of them were particularly good horsemen (some weren't) but it was lovely to see them work their horses and swim them in the river.

After leaving the almost quirky madness of Appleby it was lovely to go and spend a couple of peaceful hours up in the hills overlooking Ullswater and the Patterdale church where Doug and I got married in 2007. It was interesting to see how the villagers have coped after the floods and although there is still a lot of work left to do it is so beautiful and was full of tourists in the villages of both Patterdale and Glenridding, so hopefully they are now back on track 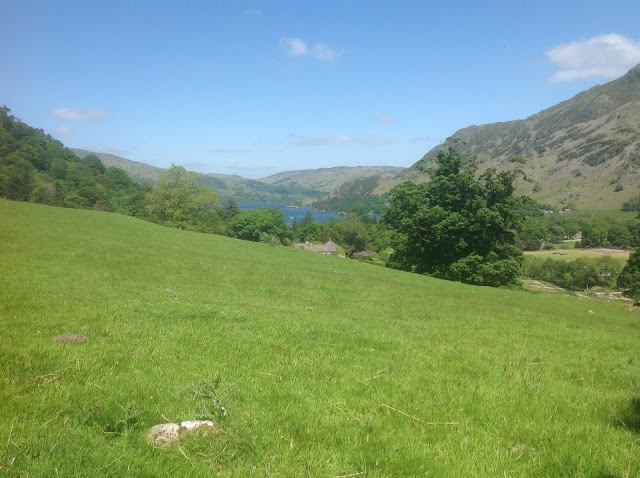