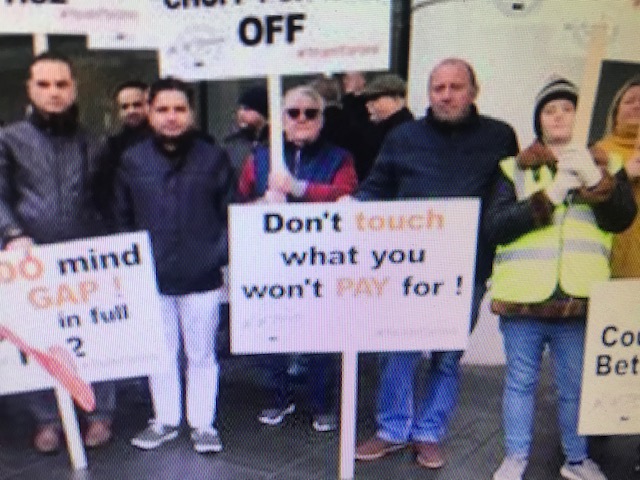 Yesterday Doug went to Birmingham as we had heard that there was a protest against the way HS2 were treating people. It was organised by the Taroni family who have a number of scrap yards in Birmingham most of which are affected by HS2 and they haven't been paid what they are owed and are not leaving their property until the bill has been settled. Anyway it is just as well Doug went because up until now we assumed that HS2, being a government body, were reasonably honourable and would pay compensation on the date of vacant possession. However, Doug heard from numerous people who believed the same, had handed over the keys to their property and had not been paid a penny - One man's house had been possessed, he had been promised a certain amount of compensation and bought another house with a loan. Eighteen months later he still hasn't been paid for the original house and he is now living in his car as he has not been able to pay for the second house and has racked up huge bills. Another lady has had her house and business compulsory purchased, she vacated the property, the agreed compensation was not paid, squatters have moved in and wrecked the place and now HS2 are saying that they are only going to pay 50% of the value now because it has been devalued by the squatters. There were stories of suicide attempts, broken marriages and most of the people he spoke to were on anti depressants. So many horror stories and quite unbelievable that these things can happen in a civilised society.
Now we know how dishonest HS2 are we will not be vacating Blackgrounds until our compensation has actually been paid. Thank goodness we found out. The Taroni family and their employees have pledged to come to Blackgrounds on the possession date (30th January) to see off the bailiffs and they are not to be messed with!!  We have also had an awful lot of support from lovely friends who will also help us in our cause. There are people a lot worse of than us and we will ensure that the word is spread so that everyone who is affected by this crazy railway line is fairly treated and paid for what has been possessed.
Anyway, all good on other fronts  The horses are going well and we had a great night out last night with some good friends. It isn't all doom and gloom....!
Posted by Pauline at 10:27