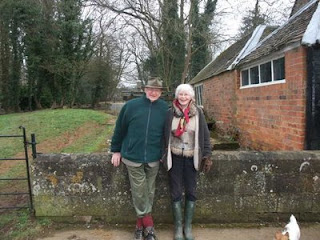 Alan and Anne Beckett came for lunch yesterday and watched Dream and Red go up the gallops first. Alan used to farm on a large scale in the Wythall area near Birmingam. In the 1960's he also started up a small farm shop which is now hugely successful. Alan and Anne are the sort of people who think nothing of jumping on a tandem and cycling from John O' Groats to Lands End or walking the entire coastal path of Britain - they put us (marginally) younger mortals to shame.
They are both Nuffield Scholars and were kind enough to award me the Alan and Anne Beckett award in 1997. I can honestly say that it has been the best thing I have ever done and I have not looked back since. So, thank you so much, Alan and Anne for giving me that unique opportunity.
Posted by Pauline at 07:19