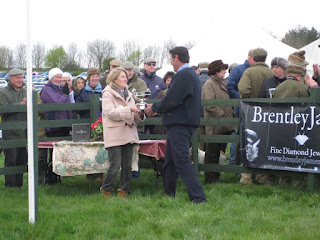 JAKE WON AGAIN!! AND it was Doug's birthday... 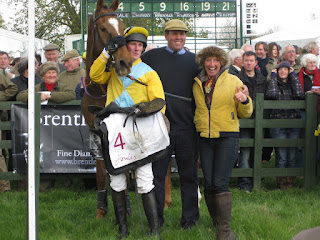 A fantastic week-end. We started it with Jess and Cyril at High Easter - Cyril and Christopher were going great guns and managed to do a whole circuit, up with the pace, before Cyril hit the fence in front of the crowd very hard and unshipped Christoper, whose huge support group all gasped with horror and then when Christopher got up raucously cheered and hollered, completely forgetting about the remaining jockeys and the race that was in progress. Needless to say Christopher was fine and just champing on the bit to get on with his party that was in full swing - ad lib champagne and piles of food. it was then Jess's turn and she was in a very competitive race - a massive step up for a horse that had only been on the track three times. The pace was ridiculously fast and we were surprised that she kept up in third place for two and three quarter miles but then Toby said that she made a noise as though she was choking on her tongue so he pulled her up. She may need a tongue tie for her next run or just a tighter nose band so that the air doesn't get under her tongue and cause it to flap up and choke her. We were very pleased with her though as she can obviously go the faster pace of a restricted race. We then had to join Christopher with his celebrations - great fun, but would hate to think what it would be like if he ever gets around without falling off!!
The following day was Doug's birthday and Jake's big run against the highest rated pointer on the circuit (Penmore Mill) We also had Aitch, Paddy and Cloudy Moon who were all running but we weren't expecting so much from them as we knew the ground and the trip wouldn't suit them as well as Jake. Jake was third favourite and Penmore Mill was 5/2 hot favourite. It was a fantastic race, with Penmore Mill trying to give Jake the slip and at one stage being 10 lengths in front with Jake looking as though he didn't stand a chance - but Jake's heart and his jumping ability made a thrilling finish with him overtaking the favourite in the air two fences from home and flying over the finishing line four lengths in front and beating the course record for the fastest time. The crowd went mad and it was the best birthday present Doug could have - He is very proud indeed of his boy and now has aspirations way above his station of Jake at Cheltenham in three weeks time. The other three ran well but were all pulled up before the finishing line as the ground didn't suit them and rather than bottoming them trying to get home the jockeys were instructed to pull up if they weren't going to be placed so as to save them for next week when the ground and track will be more suitable.
Needless to say the celebrations in the car park went on until dark, ending with Doug riding Jake bareback with a head collar into the marquee where the disco was in full swing - the crowd all parted to let them through and the bar man gave Doug a pint of beer on his way past while everyone cheered him. Jake loved it and knew he was the centre of attention - it could have all gone horribly wrong but thankfully everyone got back safe and sound. Lucy has a photo of both our jockeys, Toby and Pete lying comatose in the weighing room - both of which peaked far too early - just as well they know how to pace themselves in a race!!