At last - some runners! 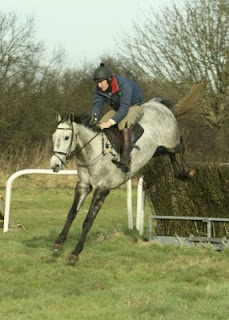 24th January 2009 - Velvet Blu's first start of the season at Larkhill. Will Telfor rode her in the Intermediate, a hot race but there wasn't a restricted and we wanted her to have a start as there was a chance that Thorpe may be cancelled due to bad weather. She was travelling really well four from home when she clipped the top of the fence and stumbled onto her nose, she nearly found a fifth leg but just got bumped and went over. Will was gutted and lay on the floor some way from the fence cursing.... we were just pleased that she was OK. The most important thing is that she is around to fight another day. Will's comment "I was just wondering when to let her go - she's a machine!" In hindsight Velvet Blu was probably a bit over the top as she has been ready to run now for the last month and was probably a little too keen at her fences. She is having her next run at Horseheath on 31st January.

25th January 2009 - Velvet Dream's very first start at the Heythrop. We were lucky enough to get David Mansell to ride her who gave her a peach of a ride. The ground was very tacky and only two got home in the first division so the most important thing to us was that she learnt something, having enjoyed her day out and wasn't bottomed. David made sure that she could see every fence and by the time she came around the second time she was jumping like an old hand. David pulled her up when she was still on the bridle but made a slight mistake two from home which could have been tiredness. There was only two in front of her at this stage so we were absolutely delighted. She has been such a difficult horse to get to the track that we thought this day would never happen. David came back beaming "What a bonny mare!" He was delighted with her jumping and her attitude which was very workmanlike. He would like to ride her in the mares only maiden at Whitwick Manor on the 21st February. It is a bit far off as she has come out of her race so well but she is an easy horse to do even though she is fully fit so should be OK.

28th January 2009 - David Mansell came to school Velvet Blu, Velvet Red and Velvet Dove. They all jumped really well in particular Blu and surprisingly Red. He will be riding Blu in the restricted at Horseheath - Red is still about two weeks off running. Pennytino (trained by Gerald Bailey) won her restricted really well at Thorpe at the weekend which makes Red's form look pretty good as there was only a very short head between them at the Oakley pt to pt last year and Red has since had a wind operation which (fingers crossed) seems to have worked.

29th January - We took Velvet Frog (not named yet but French bred!) to Paul Webbers for a loose schooling session. We went to Goffs National Hunt sale on the 10th December with the idea to buy a foal to keep Dove's foal company. The sale ring was completely empty with no buyers so we ended up buying 4 fillies, all from winning mares at a very reasonable price. Velvet Frog was one of the fillies - she was 4 years old and supposedly hadn't been broken in, she was a big rangy mare, covered in rain scald but with a nice winning pedigree so we took the risk. She has been broken in now for 7 weeks and is going unbelievably well although about two weeks ago we hit a brick wall with her where she didn't want to go forward and kept on rearing up. We began to think that someone had tried with her before and failed - checked her back and her teeth but nothing wrong so gave her 10 days rest and started again. Since then she hasn't looked back, has been on long hacks around the farm, gently up the gallops (with Doug on board!!) and has popped poles in the school. As she gets bored very quickly we thought it was time to put her over bigger obstacles to see how she coped and we were delighted - she just loved it and was a complete natural. We had difficulty stopping her, she would still be jumping around now if she had her way!
The downside was when we had finished we went back to the trailer where her travelling companion (Velvet Dove) had half jumped over the front bar and was completely stuck. At one stage we feared the worse but once we had managed to lift her back over there was no serious damage, just nasty scrapes and she will probably be rather sore in the morning. We can't understand what she was thinking of as she comes to all the race meetings now as a companion to the youngsters and is normally as good as gold. She is old enough to know better....
Posted by Pauline at 08:16