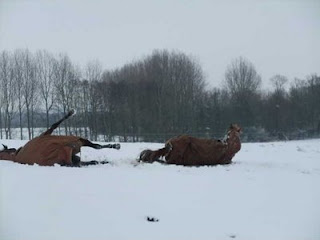 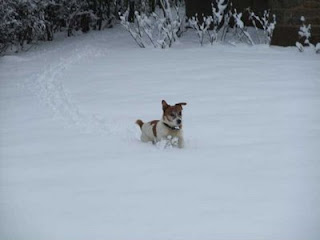 The chooks hate the snow, but Jack and the horses love it 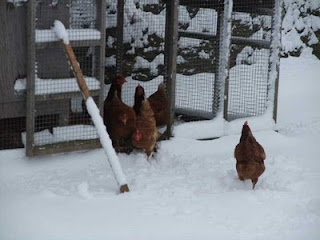 As we couldn't do much with the horses and Doug couldn't go to work we did some office work and then I 'supervised' the erection of several nesting boxes around the garden and in the small spinney next to the house. Our garden is full of birds at the moment because of the hard weather and I'm filling the feeders twice a day as they are so hungry. I am hoping that by putting the nesting boxes up we will encourage them to stay with us so that I can enjoy the dawn chorus in the Spring time.
Yesterday Georgia came to ride out and we took Dove, Dream and the Frog once around the circular gallop and twice uphill. Frog was really on her toes and rather a handful, the snow flicking up seemed to unsettle her, I was rather pleased I was riding Dream and Dove was unusually well behaved. This was the first time we had been out without Blu since her death and we all felt it very deeply. She was our benchmark, and it was difficult not to compare the other horses with her and wonder how she would have coped with the snow. We miss her so much...
In the afternoon we took Dove to see a chap called Roy who is a guru on problem horses and can normally find a reason why they are behaving badly or not moving as well as one would expect. He is the 'last chance saloon' as generally speaking you have already tried the vet and the chiropractor before you resort to Roy. He spent an hour and a half on Dove and found three main problems, the worst of which was between the base of her neck and the top of her shoulder. It was a muscle very difficult to get to and had been in spasm for some time, he thought it could well be why she suddenly freezes, runs backwards and blocks on the right rein. She is normally so feisty and yet it was interesting to see how she seemed desperate for him to release the tight muscles and was leaning in to him even though it looked really painful as Roy uses all his strength. When he had finished Georgia rode her around the school and her stride had lengthened by 8 inches. Only time will tell whether this is the reason why she plants - fingers crossed.
Late afternoon we decided to brave the elements and see what the outside world was like - partly because I suddenly realised we had almost run out of potatoes - Doug thinks it goes back to my Irish genes and that I have deep seated flashbacks to the potato famine - I simply cannot bear not to have potatoes in the house, anyway, we were rather disappointed that the roads were not as bad as we thought they were going to be, there were no stranded cars, nobody hitch hiking and in the village of Byfield not one single person fell over, it wasn't like the BBC news at all. It made me feel rather guilty for not getting all my orders done today as I had assumed that the post wouldn't be picked up so there was little point.
After we had bought the potatoes we had a lovely walk around Boddington reservoir and on the drive home just as it was getting dark I saw two Barn Owls, separately, one was hovering near Milton's (I didn't know Barn Owls hovered, but it was definitely a Barn Owl and not a Kestrel) and one just near the bottom of our drive. I love Barn Owls and have just bought a Barn Owl nesting box and it would give me so much pleasure if it was actually used. I wonder how I can let them know about the 5 star accommodation waiting for them here at Blackgrounds farm?
Posted by Pauline at 10:50