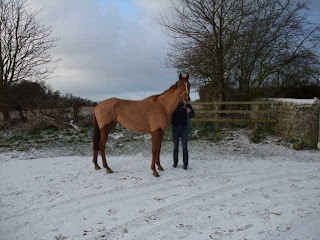 Velvet Frog - (not her real name!)


A much better day today - the sun shone and the snow is beginning to thaw. Georgia was in this morning so we took Red, Dream and Frog up the uphill gallop twice. We had heart monitors on the Frog and Red and it was interesting to see that although Red's recovery rate wasn't as good as before her lay-off her maximum heart rate was still pretty low at 159 bpm compared to Frog's at 206. She has managed to keep her fitness fairly well considering she has had nearly three weeks off. Both Red and Dove who are out of the same dam have incredibly big hearts - this can sometimes lead to problems if they are not trained properly because to work them anaerobically as opposed to aerobically you have to get the heart rate over 160 bpm. This is because in race conditions the heart rate will always be higher than it is at home (because of more effort and the excitement of the race). If the heart is not used to working anaerobically (over 160 bpm) it can lead to lactic acid build up and a very tired horse who will either fall or be pulled up. A big heart has to be managed differently, as surprisingly, it will need a lot more work than a horse with a smaller heart. Some horse's however, particularly the 'nervy' ones (like Dove) keep themselves fit because their heart rate shoots up when they see something 'scary'. However, a laid back horse with a big heart can be the most difficult.


Interestingly, a friend of mine, Linda Pestell, used to own a horse called Little Shilling, she bought a heart rate monitor and used it on him. She would tell us his readings - his maximum at the top of Ben Pollocks very steep gallops was only 127 bpm. We thought she must have got this wrong or alternatively he was potentially an absolute super star. He raced a few times and was very moderate so we thought she must have mis-read the readings. She sold him on to another trainer. Little Shilling has now won 6 races on the trot and is possibly going to Cheltenham. Could it be that the new trainer managed to work that huge heart in a more efficient way?
Posted by Pauline at 10:27