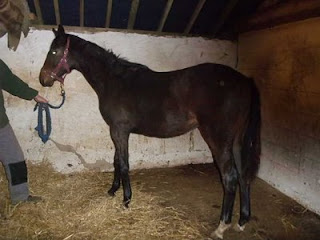 
It was so good to see Royal Auclair win at Fontwell in a Hunters Chase on Sunday. What a lovely genuine horse. He has now won over half a million pounds including three wins at Cheltenham and now looks all set to run in the Foxhunters there this March. It is so good when they have done so much racing and yet still have such enthusiasm. We were lucky enough to buy a relation to him at Goffs in Ireland last December. A yearling filly by Useful out of a half sister to his dam. She looks quite smart at this stage.

Have just been looking for Jack who has gone missing whilst hunting bunnies in the spinney near to the house. I am getting really worried now as he has been missing for more than 4 hours. It isn't like him to miss his tea...
Posted by Pauline at 14:45