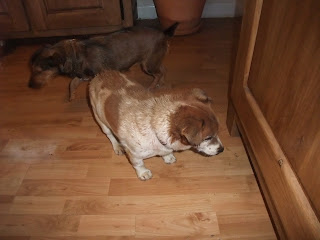 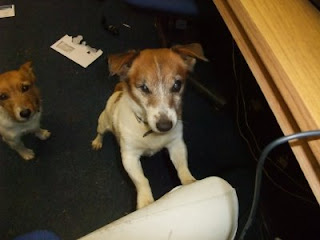 Jack the 'White Hunter' having returned from his 10 hour battle .

Jack, feeling slightly guilty, helping with tonight's blog.
Such a stressful 24 hours - Jack went missing yesterday evening 6- ish, we spent most of the evening/night looking for him with Doug proclaiming him dead for certain at 10 pm when we had done a full search of the woods with no sight or sound of him. Female badgers at this time of the year are notoriously dangerous with their young and will kill any intruder at the slightest hint of danger, added to this, unknown to me, one side of the badger sett was very close to the river and there was a sheer drop- very easy for a blind terrier to lose his footing and fall into the water. As I had heard him barking at around 6.30 ish , Doug wondered whether Jack had fallen into the water and was barking to get help - this made me feel awful as I had cursed the silly old sod for not listening to me and decided that he knew his way home so could jolly well get back on his own - I felt so bad. I know it sounds silly as he is only a dog but he has been with me through thick and thin and I think you only get one or two really great dogs in your lifetime and he was one of them. He still hadn't turned up at 1 a.m by which time I had already decided that we were not going to go hunting tomorrow but were going to dig the whole wood up if necessary even if it were just to retrieve the body. We barely slept and at 5 am Doug got up for the loo and went downstairs to see if Jack had returned - I was awake but hadn't dared check because I knew if he hadn't got back at this stage then he never would. Doug got back into bed saying nothing and my heart sunk, He wasn't back... Jack is dead. I tried to reason with myself and accept the fact that he was getting old and that he was going to die anyway sometime ..... "he's back" Doug said. Oh, the relief...... and then - the silly old twonk! Covered in mud and with a chunk out of his ear missing he was still alive. What a hero! Doug wasn't quite so complimentary and they are still not talking....
Anyway the next drama this morning was that Red was as lame as a crow. Yesterday she had done a really good piece of work on the grass gallops and really impressed. We were just beginning to think that she was going to be the star of the yard after all and that we were going to have some fun this season and then this. The whole leg was hot with just a little swelling above her fetlock. As the vet was coming anyway to blood test Dream we put a cold boot on and got ready for hunting with very heavy hearts. A year's rest.... just when she was beginning to show some form...
Dove, Frog and Dream went hunting with the Bicester. First time for us with them and they were a really friendly lot. The scent wasn't brilliant but perfect for first time out for the Frog who had had a little Sedalin and was very well behaved for the first hour but then gradually became more of a retard as time went on. Doug had to go on a spraying course anyway at 1.30 pm so was able to leave early before she completely flipped. Georgia and I stayed on until having to head back because of the vets visit at 2pm. Dove behaved really well with no more than a couple of half hearted plants at stressful times like going through gateways or just before going over a bridge. Dream was just ' Dreamy'.
Andrew Higgins from Avonvale has been my horse vet for over 20 years and is brilliant. He felt Red's leg and knew straight away it wasn't a tendon problem - she had an infection in the foot and the heat in her leg was referred heat from her foot. She had perhaps trodden on a stone which had broken the sole slightly and caused a small infection. Another massive relief. Not out for the season after all. Phew....
He also took blood from Dream, Dove and poo from frog to see if her lack of weight gain was anything to do with a huge worm infestation which the normal wormers were failing to kill. Results will be back tomorrow.
As we have had very little to celebrate lately we decided to crack open a bottle of fizz this evening - most people celebrate when things go really well. We have resorted to celebrating when things don't go too badly!!
Posted by Pauline at 13:36