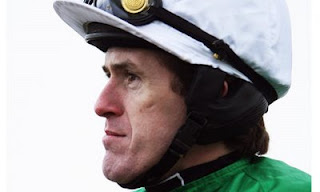 Tony McCoy has at last ridden his 3000th winner - what an achievement! Having just had a nasty fall on Miss Sarenne at the last when well clear he picked himself up and rode Henderson trained Restless D'Artaix.
Henderson said: "He starved himself to ride the filly that fell (Miss Sarenne) and he was genuinely gutted about that "He's ridden two finishes and I think he was the only person that would have won on either of them, the one that looked an easy winner goes and tips up - After that it was fair justice that we got it over with today.”
"It couldn't be wetter, it couldn't be colder, he's starving to bits, but he can go and ride finishes like that."
"He's quite extraordinary and that's why he gets to those quite incredible numbers."
McCoy has won the Cheltenham Gold Cup, the Champion Hurdle, the Queen Mother Champion Chase and the King George in a glittering career.Only the Grand National continues to elude him in his ceaseless quest for big-race triumphs.
I have to confess that I completely failed to understand why Hayley Turner won the Channel four Racing Personality of the Year award and not Tony McCoy. Not taking anything away from Hayley, riding on the flat is a completely different ball game to riding over fences where there is a one in eight chance of having a fall. True grit, determination and courage is necessary. Without being politically incorrect if Hayley was male and not female would she still have won the award? I am sure that Hayley herself would like to win on merit and not on gender.
Posted by Pauline at 09:22