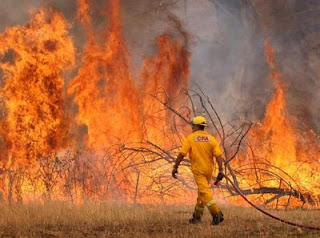 I feel terrible that I have been moaning about the weather here when Southern Australia is suffering so badly with the worst bush fires ever. Almost 200 deaths so far and whole towns completely destroyed. Our thoughts are with the people who's lives have been affected by this terrible catastrophe.

This morning Georgia had to be picked up from Culworth because the Culworth road was completely blocked by cars unable to get up the hill. The snow has turned to rain making the roads if anything, worse. Dove, Dream and the Frog went out for a long hack in the snow over the hill at the back of the farm. Coming back the Frog was still full of herself and tried to buck Doug off so we thought we would take her and Dream to the long uphill gallop and try and get a bit of steam out of her. The gallop was still covered in snow and hard work for them. They both had heart monitors on and it was interesting to see the difference between an unconditioned heart and one that was relatively fit. It was also interesting to see how tough the gallop is now that it is covered with so much snow - They both went up twice and Dream's highest HR at the top was 187, Frog's was 220, the recovery rate for Dream was particularly pleasing - she was down to 88 in 3 mins whereas the Frog's was 113 at the same stage. Without the snow Dream's top heart rate would be between 150-160 bpm. However, we were amazed at how strong the Frog was - twice up with 16 stone on her back and she still had a buck in her on the way home! Quite extraordinary for a horse that has only been broken in for 7 weeks.
Posted by Pauline at 08:08