When will we race again? 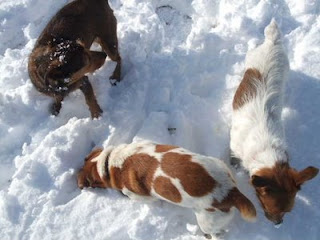 Jack, Lucy and Titch hunting in the snow.

This has gone on too long now! More snow forecast tonight. Very little racing on this weekend or likely to be next weekend. It is going to make the season really short. We have still got one more horse to qualify (The Frog) and are running out of time. Hopefully the hunting season will be extended.
We still managed to get all four horses out today for a hack around the farm. I was delighted with Dove who had her first outing since the Roy treatment. She walked and trotted with her head down in a lovely outline, whereas before she would be jogging sideways with her nose poked in the air. Her stride was much longer and she seemed much happier in herself. No planting or running backwards - fingers crossed we are getting somewhere with her. Red also had her first outing since her bruised withers - she went beautifully and was in no pain at all with the wither protector on so thankfully we can still work her. Doug rode Dream who needed his rather firmer riding as she can get rather lazy and she also went well and then the Frog who was very badly behaved as she didn't see the point in just walking and trotting and stuck a couple of bucks in and jogged sideways most of the ride. She needs a good gallop but the all weather gallop is covered in snow and wouldn't be safe so we are rather limited in what we can do.
Posted by Pauline at 06:01