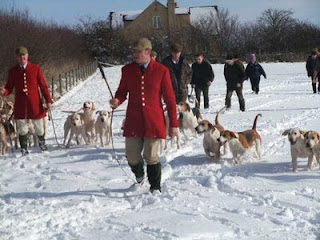 Went hunting on foot with the Bicester. As we haven't been in the area for long it was the first time we had been with the Bicester. It felt like we were the 'new kids on the block' and having been with the Pytchley for twenty years it was rather odd. Everyone was very friendly and even though the scent was non existent we still had a great walk with beautiful alpine scenery.

I have just watched the worse game of International Rugby I have seen for a long time. England against Italy in the Six Nations. I didn't watch to the end as it was so bad and even though England was winning they didn't deserve to as they only scored points because of Italy's mistakes. Martin Johnson must be tearing his hair out - there is simply no commitment, no will to win, no courage. I am just off to watch the Irish match where hopefully they will play with passion and determination even if they don't win I am sure it will be worth watching unlike the embarrassingly limp English spectacle.