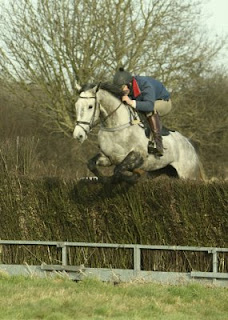 Our stable star Velvet Blu died at Horseheath when in the lead three fences from home. David Mansell rode her and although it looked as though they were going too fast he said that she was travelling so well and completely within her comfort zone. She was four lengths ahead of Mango Tango and the duo were 35 lengths ahead of the rest of the 18 runners in the restricted when she seemed to stumble 2 strides before the fence and then just not pick up. David thought that she had a heart attack but we have since had a post mortem and the heart was perfect. Tom Ellis who was some way behind also thought that it looked as though she had died before the fence. One explanation is that she may have had a brain hemorrhage - she had been brought down and knocked unconcious as a five year old when jumping hurdles at Worcester and had perhaps suffered some unknown long term damage then. During the race she had been jumping like a stag and was taking 2 lengths out of the rest of the field before it happened so it was really odd for her not to pick up at all. Jumping had always been her strong point but because she had made a silly mistake at Larkhill the week before we had got David over to school during the week and she was quite exceptional. David said that he "gave her the ride of his life" and was gutted when she fell. We are all absolutely devastated.
Posted by Pauline at 01:18