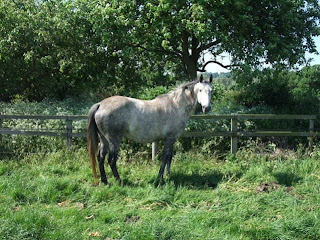 Lady in waiting.
Velvet Skye is due to foal this week and has just been brought up from the bottom meadow and put in the home paddock so that I can watch her from the house.
She never quite reached her full potential as a racehorse and was also rather unlucky. She won her maiden and came second in a restricted but then rather decided that she didn't really see the point of going around the racetrack two times and used to happily pull herself up after the first lap - not in the least bit tired. We reluctantly tried her in blinkers and they seemed to make all the difference - the first time in blinkers she was still going really well three fences from home, lying second and not even thinking about pulling herself up- when the jockey just fell off. His stirrup leather had broken. The second time in blinkers she was almost too keen and did a full cartwheel over the open ditch when in the leading pair. She was hopping lame and we took her straight from the racecourse to the vet, fearing the worst. It transpired that she had shattered her navicular bone. The vet said that she probably wouldn't be able to carry a foal because of the extra weight and the navicular was notoriously difficult to mend. We thought we would give her a chance and researched on the Internet and found an expert in America who had experimented with different shoes with some success. Doug made a shoe for her that was raised behind and lifted her heel at least an inch off the ground - this was gradually lowered as time went on to enable the tendon and ligaments to stretch around the healing navicular. We gave her a few months off and then put her to the stallion. She is now striding purposefully around the field not looking in the least bit lame so it seems to have worked. Fingers crossed that she makes a better Mum than a racehorse!
Posted by Pauline at 02:55