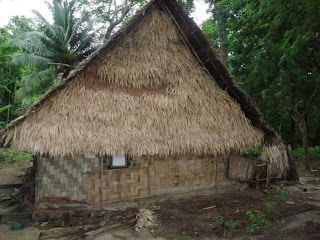 This is a typical Indian hut - beautifully made out of bamboo.
On my first day on the island of Havelock Jay and I hired some bikes and we explored the island. Jay had heard that there was a conservation programme with a group of elephants on the South Eastern side so off we went - I have an abiding memory of Jay cycling through the bustling village past various dogs who were snoozing by the side of the road - they would sniff the air as she sailed past, recognise her as 'that mad woman who gives us food' and set off in hot pursuit - at one point she had five dogs following, like a modern day pied piper.
We were lucky enough to see the elephants as they had just bought them in for the night - if they haven't gone too far into the rain forest they come in so that they don't go completely wild. There was a 50 year old female with her 8 year old female calf and a thirty year old female with her 5 year old bull calf. It was lovely to see how although not a wealthy country they are very keen on their wildlife and conservation. The elephant keepers said that we should come the following morning to see them being released back into the forest.
Posted by Pauline at 10:30