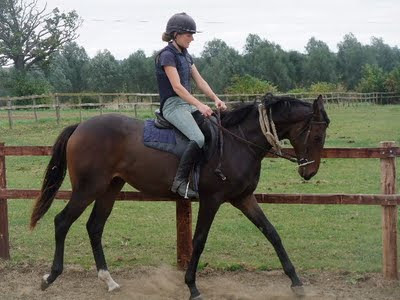 We had a lovely weekend - the weather has been fabulous so on Friday afternoon we went for a cycle ride. I had downloaded a map from the Internet which followed the battlefield trail (civil war 1642) It didn't look very far on the map but ended up being 36 miles and up and down some very steep hills. It was absolutely beautiful on the Edgehill Ridge - stunning views, so it was all worth it. In the evening Doug was helping Maurice celebrate his 50th birthday at Maurice's pub, so I went out for a meal with Sally to catch up on her news. Saturday morning we went cubbing on Frog and Harry. Frog was much better behaved. After hunting there was a champagne breakfast organised by our nearest neighbours, the Thame family, they are an incredibly social family and are always having parties, so it is rather good living within walking/cycling distance. The breakfast continued until tea-time when we thought it might be a good idea to go home and then on the Sunday they had a clay pigeon match followed by a lunch where everybody in the area was invited. There was about 200 people there and it was really good fun. In the evening, when nearly everyone had gone home they had a mink hunt and Lucy, Titch and Poppy worked as a team and excelled themselves.
This morning it was back to school for the youngsters - we were worried that they may have forgotten what they had learned but we were very pleasantly surprised as they had all progressed since Friday and we were delighted with Doris, Cloud and Dolly. Eeyore is still living up to his name and resisting the bit and not really wanting to oblige at all - however, he didn't buck this time and Amy stayed firmly in the saddle. Dolly is particular exciting us as she was so nervous to begin with and very tight but she simply floated around the ring today. Doris and Cloud have both been ridden around the farm, hopefully by the end of the week the other two will be ready to do the same.
Posted by Pauline at 13:13