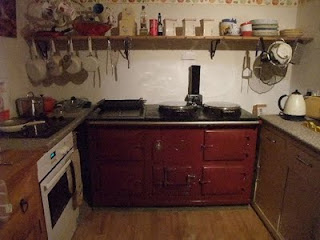 It's a beautiful morning - Aga Peter (not John as I called him before!) is in the kitchen drilling a hole in the wall for the flue. With luck we may be all fired up by this evening and ready for our maiden voyage. The little oven is still not working so having had a kitchen full of ovens with none of them working, it's quite exciting to think we may actually have oven, rather than microwave food tonight.
Yesterday morning, I sent a text to Ben to see if he could ride Frog at lunchtime - he didn't get back so that left no option but for me to ride her - Doug was on Dream (he's a bit too heavy to gallop Frog). Having seen what she is capable of doing I was a bit nervous, but she was a little angel and went up the gallops beautifully. She got a bit whizzed up on the way home but nothing too scary and I have almost completely forgiven her for her appalling behaviour in the past.
We also took Dove and Harry around the grass gallops - we had to go the back way to trick Dove, as if she knows she is going to the gallops, she gets over excited and freezes - when she saw them, she just slightly hesitated, especially as there were other horses around, but then she went on really well and relaxed nicely. The hunting has really helped her.
We have our first winter visitors to the Shepherds hut this Monday/ Tues so Doug is busy with the plumbing - we had a burst pipe in the shower, which needs sorting out before they come. They are coming all the way from Leeds so it needs to be spot on. I'm just off to pick the last of the sloe berries to make sloe gin with. Great racing/ rugby on TV this afternoon and it is supposed to rain, so signing off..
Posted by Pauline at 02:36