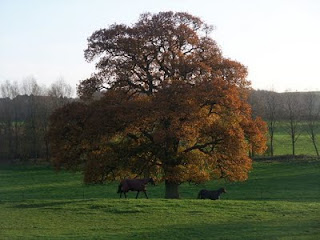 It's a howling gale at the moment so I don't suppose these leaves on our lovely oak tree will still be there tomorrow.
We had a great weekend, in that we didn't do an awful lot. We went to the opening night at The Holly Bush on Friday evening, which is fairly local to us. Lucy's brother has taken over the lease and it was a very social event!
On Saturday, Bill Adam's daughter came for a ride - she hadn't ridden for years so we just had a gentle hack. I rode Dove and she was on Dream. Dove behaved beautifully although she was very naughty with Lucy a couple of days before and she had to get off and walk her home. She is just at the stage where she is fit to burst and is rather unpredictable at the moment. In the afternoon we went to watch the the rugby - Saints v Harlequins - The Saints won, and have been playing very well this season - now that Carlos Spencer has left and gone to Gloucester (who have had their worse season for years) it seems to have improved team morale and they played very inventive, exciting rugby.
We had Shepherd hut guests arriving in the evening so decided not to meet up with the normal lot in the bar - probably just as well as we didn't really feel up to being particularly sociable. The guests were in their late sixties and I was amazed that they wanted to stay in a hut in the middle of a field, particularly as it was pouring with rain as we led them down the muddy track towards their 'boudoir' . However, the following morning they were bubbling over with enthusiasm. They had cooked themselves bacon and eggs on the George Foreman grill, had an outdoor shower and then went for a lovely walk by the lake. It was only when they got back that the hose on the shower burst and water was gushing everywhere! Back to the drawing board.....
On Sunday, Ben's parents came with their trailer so that we can take Ben hunting - I can take two horses in our trailer behind the Toyota and Doug can take their trailer and Jake on the back of his truck. They went to see Ben working Jake on the gallops and were very pleased at how well he looks. We are hoping to go hunting tomorrow, although Ben can't go until Saturday as he is working.
Lucy was in today so I rode Frog and she rode Harry. We went three times up the all weather uphill gallop - Frog was a bit nappy and tried to duck out of the gaps but actually went very well. The heart rate readings for her were particular good, and it was lovely to see how unusually relaxed she was on the way home. Harry was good but rather strong. Second lot, I was on Dove and Lucy on Dream, We just went for a hack - trotting all the way. One of the things we have found from using heart monitors is how good trotting is for getting a horses heart rate up. It is almost a better form of exercise than galloping, and there is less chance of doing a tendon. Dove was fine until we turned for home and then she had a bit of a tantrum - she soon settled again and we all got back safely.
Doug has been busy fencing all day, so I had better do evening stables before he gets back...
Posted by Pauline at 08:27