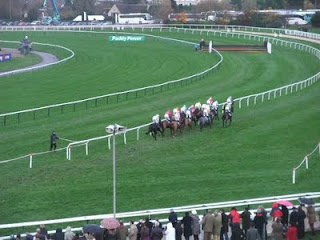 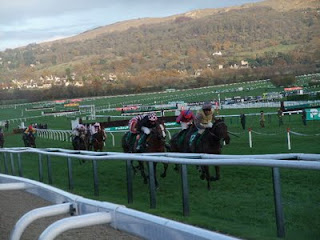 We had a great weekend at our favourite racecourse - Cheltenham. Superb racing and a terrific atmosphere. Since we have moved we are closer to the track, so we treated ourselves to a membership, which works out much cheaper and gives us access to the members marquee - great place to meet like minded people.
Joseph (my son) and Sophie came to supper last night. They were very excited as they are about to move into the 'big house' as Joseph's Grandparents have downsized and moved to the village. It will be good for Joseph to be nearer the action on the farm, as I think at the moment he feels a little out on a limb.
I have just come back from a rather hairy ride on Frog, It's a howling gale and she felt somewhat fresh - we went to the circular gallop, Doug was on Harry and Lucy on Dream. We had to walk/trot the first circuit because Alex Hale's string was warming up, and then cantered/galloped the next two circuits - she very nearly had me off at the same place as before (the gap out) but didn't succeed this time. Apart from that she went really well and I was delighted with her. Dream went well but Harry has got really strong again and seems to have forgotten everything he learnt before. He will have to go back into his nose net again. Lucy has now taken Dove for a fast hack - Dove planted in the yard, so I hope we're not starting that caper again. She's got the excuse of not wanting to leave the others, so fingers crossed that's all it was.
Posted by Pauline at 01:21