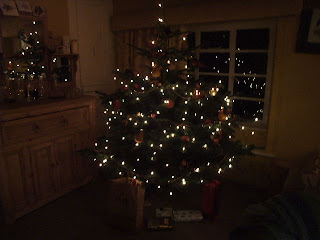 Christmas Day.
It was a beautiful morning, with snow still on the ground but the sun was shining. We had the horses to quickly skip out and I still had presents to wrap when we got a call from Ben who had taken Jake for a ride. Before he left I warned him that Jake may be a little fresh as he hadn't been ridden for a while - sure enough, Jake had shied at something and Ben had fallen off. "I'm hurt" he said on the phone. We jumped in the truck expecting the worse. Two weeks ago it was his mother who had broken her leg - surely it can't be a double! We had already decided which one of us was going to spend the day in casualty when we found Ben on the side of the road, holding onto Jake, he looked very pale, and his ankle was hurting but he could still walk on it so we made him get back on, Doug then walked with him to the gallops and Ben took Jake up twice. By the time he got back to the yard his ankle was thankfully much better.
In the meantime I rushed back to the house to try and catch up on lost time to find Jay happily painting the bird boxes she had made for presents on the dining room table. She hadn't wrapped half of her pressies and was going to her Auntie Carrie's for lunch to see her other Grandparents. She then wanted to take over the aga while she tried to melt some suet for her bird feeders, Needless to say I was getting somewhat stressed as my guests were due to arrive any moment, I was still in my scruffy clothes, the house looked as though a bomb had hit it and everything was totally disorganised. It's crazy the way it seems to take me by surprise every year - It's also crazy to get stressed out about it, it's only lunch for heaven's sake!
Anyway, as it happens it all went very smoothly - Doug was brilliant on the cooking side - he is so in love with the aga that it is difficult to get a look in, which I don't mind at all. Mum, Dad, my sister Rose, her husband Trevor, and my brother, Peter. Jay came back for tea. Joseph wasn't with us as he was spending the day with Sophie's family so we had our Christmas dinner with them on Tuesday, and Josh who wanted to spend the day with his new wife, Emma, at home on their own. We had lunch and then watched the Queens speech - it was still a beautiful day so we went for a walk down to the river (apart from Trevor) then we came back in time for Christmas pud and the opening of pressies. All very traditional and rather nice.
Posted by Pauline at 11:25