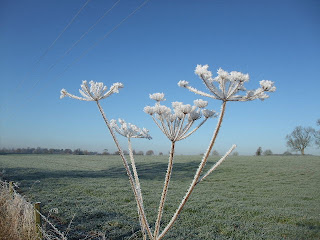 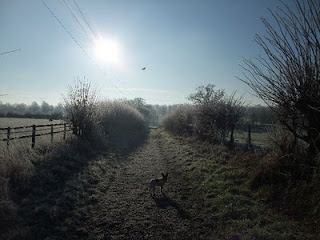 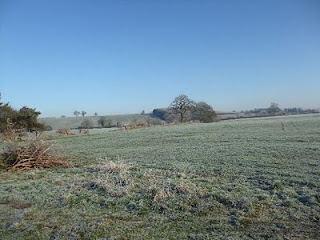 The Big Freeze
It has now been the longest cold snap for 30 years. It was minus 7 last night and we are expected to get 18 cms of snow tonight. We have been really lucky compared to most people as we have been able to take the horses out everyday as the gallops haven't frozen and are riding really well. Although today Dream fell over on some frozen ground with Jay on board and we were very lucky that neither were badly hurt.
We had a wonderful New Years Eve (Jay was re-united with her purse and had a terrific time...) We went to Lou Bates for a dinner party - Jude Wilson was there and was as nervous as a kitten as her top class horse, Punchestowns, was due to run the following Day at Cheltenham. As it happened due to the frosty ground they withdrew him and he didn't run in the end. We went and although it was a little disappointing as a lot of top horses didn't run, it was a beautiful day and still very enjoyable.
Doug is still getting on really well with Dove who has been happily going up the gallops without even thinking about planting. This time last year we couldn't get her anywhere near them. It could be because of the cold weather which has stopped her from ovulating, keeping her hormones at bay. Frustratingly, she is absolutely spot on for racing and is entered for this weekend (as is Jake, Dream amd Harry) but it is highly unlikely to be on because of the frozen ground. We have just got to keep them ticking over trying to avoid injuries which when they are fully fit is rather difficult.
Today, Jay and I went shopping to buy her a bike for her birthday, we found a nice one in the sale and then went hunting for a basket for the front -found a huge one which will be a challenge to attach to the handle bars - she will look like Miss Marples cycling around campus...
Posted by Pauline at 09:59