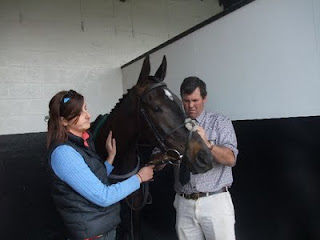 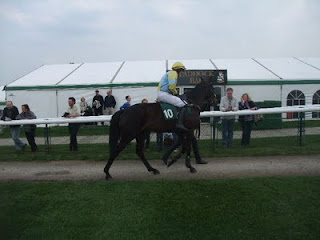 Doris had her first run on a public race track yesterday and she was an absolute star. It was a really rough race with 12 thrusting horses, most of which were older or had raced before.She was pushed and bumped around and took it all in without being slightly fazed. She was boxed in for most of the way and then when she found a gap she accelerated into it but was then boxed in again, it came to the hill before the finish where she made some ground but weakened just before the line and ended up finishing mid-division. She seemed to love it and a lot of people came to us afterwards and mentioned her acceleration when she found a gap and were really impressed by her. Its her attitude I love. her mother won, her grandmother and her great great grandmother and you can see why as she is 100% tough and genuine and just wants to please. An absolute pleasure to train and the sort you would want to breed from in the future.

It was another hot day today - no rain is forecast and although we have entered Jake up all over the place for this week-end it very much depends on the ground. I had a really big day in the office today and Doug and Will had a great days fencing on the Estate.
Posted by Pauline at 13:27