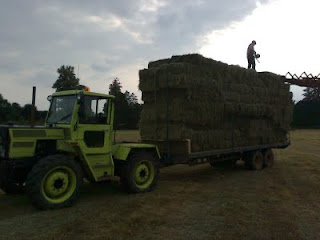 Haymaking with the 'Green Goddess'

The Green Goddess is Doug's favourite lady, and he was very proud that she could pull this rather large load of hay all the way home (two miles) without complaint... It wasn't stacked by Doug and very nearly tipped over, heart in mouth stuff.

We have been busy this last two days getting the hay in before the rain - two hours after we had stacked the last bale the rain came down. Perfect result. It was a stroke of luck that we had the hay in the first place as we had originally rented an extra field as we thought we had too many horses for the grass we had, as it turned out the field was too rough to put horses on so we decided to take hay from it instead - we got 610 bale from 7.6 acres which considering it has been a bad season with very little rain was much more than expected. With hay bales costing in excess of £4 per bale this year it was a good move and it's great to have the barn full.

There has been no news as far as the shot lambs are concerned - the last I heard the two that were spared are still alive - the lamb is being nursed by Vernon's wife and the ewe is hanging on - sadly the maggots will probably get the better of them eventually but at least they've had a chance. Apparently the neck shots are in line with other mass shootings in rural areas and its thought to be something to do with the fact that Sheiks/Pakistanis regard whole lambs heads as a delicacy, and the best way to get the meat from the body of the lamb, but also to get the premium from the lambs head. Sadly, it's not the best way to kill an animal and it leaves a lot of pain and suffering in its wake apart from the financial loss to the farmer

I have a confession to make - We have just bought another horse. She is an Irish five year old, very nicely bred for the flat but got too big, has run in one point to point in June in Ireland and finished 7th out of 16, and her name is 'We never give up' which I thought was very apt - I have bought her unseen, which I don't like doing, but the person who is selling her - 'Fat Pat' has sold a number of horses into our area and they have always been better than described - he seems to be very honest (for an Irish man!) and I have seen the video of her in her first point to point and she seemed very genuine. She wasn't silly money and would be a great horse to have in the yard and syndicate her or lease her out for the season. Hopefully she will be arriving in the next couple of days and even more hopefully she will be everything Fat Pat said she was!!

We have had a busy week-end with supper in the shepherd hut on Saturday night for a few friends - Maurice (Doug's best man) was determined that we should sample every cider that has ever been brewed and bought a massive great big ice box with him , luckily the other guests helped us out, and then a barbecue on Sunday lunchtime on the estate for the 'North Banbury Farmers' Apparently they have a barbecue every year before harvest and have been doing so for over 100 years. I think some of the original members were there.. It's great to see such a strong farming community and everyone was very upset and concerned about the shootings.

The vet came today to vaccinate all the horses - luckily it went really smoothly without any hiccups - when there are so many horses with different dates to be vaccinated on it is so difficult to keep track of them all so we try and do them all at the same time, unfortunately, Laverty (who doesn't belong to us) slipped through the net and has just gone over the yearly date which means he now needs three vaccinations to get him back in line. Very annoying and expensive.

Doug has taken an early night - humping those very heavy bales around has taken its toll as he also helped to get the rest of the estates hay in. I haven't stacked a bale for a while and my dainty little (!?) hands are very sore - Night night.
Posted by Pauline at 13:39