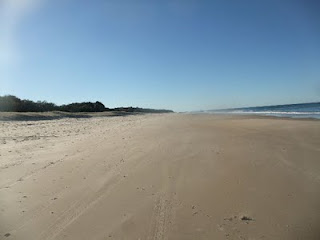 Australia - 17th July - 2nd August 2011
The flight didn't get off to a great start - There was a technical fault and the plane was stranded on the runway for two hours mostly in darkness as they had to switch everything off - with 13 hours to Singapore ahead of us, plus the extra two hours it was a bit of a marathon. We were also concerned that we wouldn't catch the connecting flight to Brisbane as there was only three hours in between which was reduced to less than one hour by the time we got to Singapore. However, we caught it with no problems and arrived in Brisbane early on Tuesday morning and took a bus to Doug's parents in Buderim. It was lovely to see them both and Henry, Doug's father. looked a lot better than we expected. They live in a lovely house high up which looks down onto a rain forest with the sea in the background. We had a coffee and caught up on all the news - in the afternoon, after a bit of lunch we managed to fight off the desire to go to sleep and went for a long walk on the nearby beach, which is just miles of white sand - even though it is the middle of their winter I was surprised at how warm it was, although it did get very cold in the evenings and early mornings.
Posted by Pauline at 10:06