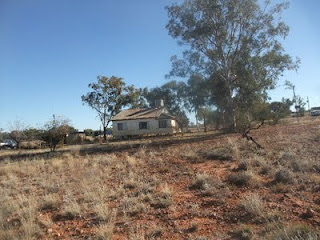 Back to Australia - July 25th We woke to the sound of Galahs taking off from the nearby trees - the sound of them all leaving together almost shook the house, it was really cold and you could see the ground through the floorboards and the sky through the air conditioning vents, Australian houses aren't designed for cold weather as their winter doesn't last for long and it soon warms up during the day.
The sheep had all been mustered in for lamb marking (docking tails, castrating and ear marking)The ewes were being crutched and all had lice treatment and the rams shorn. They also had to be counted for the sale. We helped in the pens in the morning and then got on with sorting the cottage out. Doug's parents had last stayed there two years ago - they used to make regular trips out to the farm from their coastal house and during the drought helped feed the cattle and sheep. Sadly because of Henry's illness they were not able to make the trip again. In the meantime there had been a plague of mice through the cottage so it took some cleaning up. We filled the back of the Hiluxe three times and drove to the burning pit - Doug found his guns which were still in good order and we were delighted to find Granny Harkin's racing colours (blue and white hoops, white cap) which hadn't been chewed by mice.
Posted by Pauline at 02:34