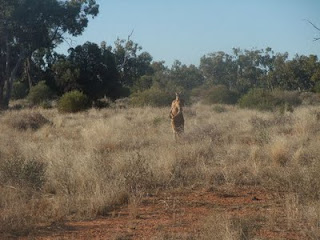 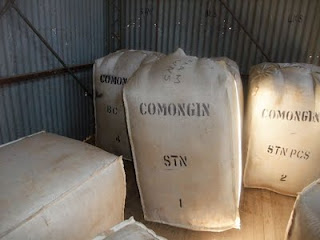 Check out the red kangaroo seen on the way to Cowley -he was chatting up a little blue female, and when we stopped to look at him he stood up on his hind legs and seriously flexed his pecs - what a boy!

The morning was spent packing and cleaning in the cottage, after which I took the boat on the lake. We had found this boat in the shed, and it was the same boat that was used at Woodlands (the last farm) to get across the river when it was up - sometimes Henry used to have to load the children in it to get them to school as there was no other way out, he also put a motor on it and one day it got stuck on full revs and crashed straight into a tree, the dent was there to prove it - so it had a bit of history. Anyway, I decided not to try and use the motor but just rowed it around the lake and it was absolutely stunning. The bird life is awesome and I just wish I knew my Australian birds better as I'm not sure what I saw. I know there was a pair of wedge tailed eagles soaring above and massive flocks of white cockatoos, and other brightly coloured parrots, plus lots of little wader birds and ducks/grebes on the lake.

In the late afternoon we went to visit an old friend of Doug's called Ian and his partner Sandy. They manage the Cowley property which is of a similar size to Comongin about forty miles south, and used to be part owned by Doug's father, Henry. Doug managed it when he was 21 years old and fresh out of agricultural college - it was a massive task for someone so young but according to outside sources he made a terrific success of it and after three years substantially improved its performance. Ian is doing an equally good job and it was great for me to meet him and Sandy. It was a very 'happy' place - when we arrived, Sandy was being followed by two orphan lambs, a calf and the tiniest little piglet, who's mother had been shot - wild pigs are a dreadful nuisance as they eat the lambs, but Ian took pity on this little one and brought him home in his jacket pocket -he was only two weeks of age but an absolute character, he was doing rough and tumble with the dogs and trying to play with the lambs, totally fearless even though he was no bigger than a guinea pig.

When Doug managed the farm he had an elderly Yorkshire woman called Mrs Holt who had come to Australia with her husband a number of years ago and who worked at Woodlands - her husband had died and she had absolutely no family, so when Doug got the job and at the age of 70 she decided to go with him - Doug packed her up and her worldly belongings including her cat into the front of the truck and drove the 300 miles to their new life. She was totally devoted to 'her boys' (Phil also worked at Cowley during this time) and always made sure that they were well looked after, sadly three years later she got cancer and was buried at Mitchell with her husband. Sandy is convinced that her spirit is still at the farm though as she senses a 'friendly' ghost in what used to be her bedroom.

After a few beers we drove back the forty miles to Quilpie and had a meal in the local pub - very different from English pubs and not many couples having a meal, mainly drinkers and single men from the pipelines. There was a very drunk old Aboriginal man there shouting his head off and trying to talk to anyone who would listen, we did our best to avoid him and managed to quickly have our meal and escape. I was impressed though with the way he was handled by the other drinkers, they treated him with polite humour and didn't let the situation get out of hand.

We arrived back to a freezing cold cottage and huddled into bed which thankfully had an electric blanket!
Posted by Pauline at 03:35