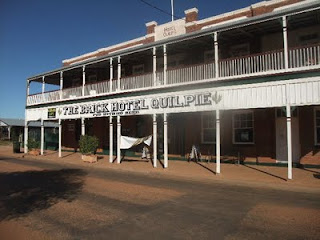 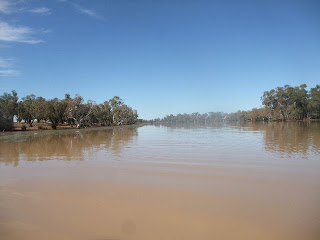 The morning was spent doing the cottage and labelling all the furniture etc to go either to Brisbane, Toowoomba (where Doug's sisters live) or back to Buderim. for when the removal men come in after the sale. Doug had got a few of his personal belongings together and cleaned his guns in preparation for taking them to the gunsmith with a view to selling them. It was our last day before heading off back to Buderim and really rather sad. We went to Quilpie for a coffee with Lorraine (who runs the newsagents) and Bob who Doug used to play polo-cross with, interesting to talk to them about their opinion on whether the farm should be sold or not. Bob used to own a lot of commercial properties in Quilpie, including the local cafe but he had always hankered after buying land and sold most of his business's to make his dream come true - now his wife, Lorraine says "we used to have lots of money and plenty of holidays but now we have neither!" Bob also said there was a real problem with getting good staff, the wage bill is massive and the health and safety rules are getting even more ridiculous. Ian from Cowley told us that every morning he has to run through the risks to his men of riding a motorbike or handling stock - also the self employed people have the same rights as employed staff so if any of them get hurt by a bull or fall off their bikes the manager is totally responsible - Australia has become like America in that claims for accidents are made at the drop of a hat, consequently employers liability insurance is very high. This was all food for thought as we had originally gone to Comongin thinking that it was a massive mistake to sell the farm and that with good management it could make a lot of money and pay back the losses that Doug's parents had incurred, however, it was becoming increasingly obvious that it wasn't as simple as we had originally thought and that selling it was actually a very good business decision. Doug's father bought it during the drought at the bottom of the market, it has just had the best season ever and would therefore be sold looking at its best, there has been a lot of interest in it from potential buyers and the economy in Australia is, at present, (more about that later) booming, However, it is still a difficult one because it has been in the family since 1882, and was always Henry's dream to own it outright, which he achieved at the age of 70. For the last nine years Henry and Jocelyn have really enjoyed their time owning the farm with the luxury of a manager sorting out the practical tasks in their absence, but it has been losing money and with Henry being ill, they understandably no longer want the stress.
After Quilpie we finished cleaning the cottage and I went for my de-stressing time on the lake.
In the evening we went for a farewell drink with Mike and Sally - while we were sitting on the veranda a couple of porcupines kept on coming out from under the house and snuffling around, apparently they haven't been seen for months, they were gorgeous so we struck it lucky.
On our way to meet Phil for a meal in the local pub we stopped by at Louie Tully's house as he had invited us to pop around and look at his and Gerard's opals - Louie used to help with mustering and Gerard used to fly the mustering plane when one day whilst flying he noticed a fault in the ground and thought that it looked as though it could produce some opals - they found out who owned the land and asked the owner if they could stake a claim, this was agreed on and the two of them started to hack into the ground with their old machinery - within a couple of weeks they struck lucky and hit a really good seam - with the money from those opals they were able to afford expensive purpose built machinery that could do the job much easier and have continued to do really well - they showed us some of their collection and they were really beautiful, it is just astonishing that something as lovely as that can just be sitting in the ground unnoticed.
We then went for a meal with Phil in the local pub and while we were there some chap called Mathew Morrow came and said 'hello' having recognised Doug from Agricultural college 26 years ago - he actually lives 2000 kms away but was working on the nearby gas line - there was only about six people in the pub so it was an amazing coincidence - he remembered Doug mainly because Doug held the record for drinking a yard of ale in the quickest time!
The lake - listen to the birds!