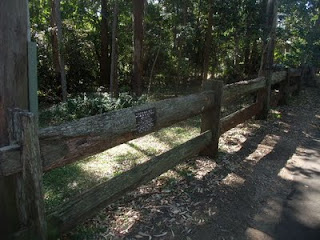 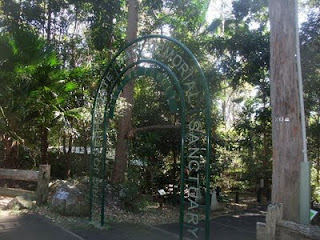 In the morning we went for a coffee with an elderly but very lively couple, Bruce and Dorothy who live two doors away from Doug's parents and are their very good friends. They were so lovely, Bruce used to be a bank manager and it was interesting to talk to him about what we had noticed about the economy - it seems that Australia is riding on the crest of a wave at the moment, everything seems to be booming, mainly, it would seem because of the export of natural gas, of which Australia is well endowed. However, the cost of living is now extortionately high and the Australian dollar is at an all time peak, which must effect the export market in the future. Australia totally depends on exports and tourism, so you would think with the dollar being so high exports of other commodities and tourism will soon dry up. Wages are also unrealistically high, we were given an example of unskilled labour being paid the equivalent of £20/hr for putting lids on cans of dulux paint. That is totally unsustainable and Bruce agreed that he thought Australia is heading for a massive recession. Apart from anything else it can't help but be affected by the problems being experienced in Europe and the USA. We said our goodbyes to them and then went for lunch at a fabulous fish and chip shop by the river - the prawns were absolutely massive and the fish beautifully fresh. They have their fishing trawler moored right outside the cafe so it doesn't get fresher than that.

In the afternoon we took a few packing cases of Doug's stuff that he had picked up from the farm and took them to a shipping company. It wasn't as expensive as we thought it would be which makes a nice change. We spent what was left of the day on Mooloolba beach, which was lovely.

I was looking forward to having an uninterrupted day on the beach but Doug had arranged for Rolfe an old friend to come around for coffee, it was such a lovely day but forecast to cloud over and get windy later on so I ducked out for a walk around the nearby sanctuary, Rolfe is great but very serious - dull at the best of times (whoops I probably shouldn't have said that!) and I didn't want to be stuck in for any longer than necessary. When Henry was well he took a very active part in the development of the sanctuary and made the boundary fence seen in the photo. It's a lovely place - apart from lots of birds that I couldn't identify I saw a pair of black cockatoos and nearly trod on a brown snake that slithered off into the undergrowth - apparently highly poisonous.

After Rolfe had left we went to Marcoola beach - another lovely beach. It was too chilly to sit for long so we went for a long walk. Doug's Mum was coming back that evening so we did a bit of shopping and then returned to the house. Dorothy and Bruce were coming around for an early evening drink to catch up with the news about Henry who had been undergoing further radiation treatment. He normally responds really well to treatment so we are all hoping that would be the same this time. We were hoping to be able to cook for Jocelyn that evening after what she had been through but she insisted that everything was already organised and produced a lovely chicken casserole. It was our last night in Australia before leaving for Brisbane in the morning.