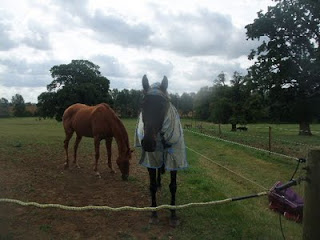 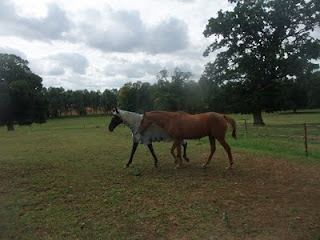 The flies have been a real nuisance lately, especially with the darker horses so we have put fly rugs on a few of the worst effected - Aitch thought Paddy's rug was hilarious and wouldn't stop chasing him around trying to undress him.

We have put the same cooling pads that are in the Stay Cold boots in the rugs and they really seemed to help cool them down.

Had a great week-end, the weather has been perfect, so lots of swimming in the river and eating outside. We went to Richard Hunnisett's retirement party on Saturday evening which was held at Garthorpe racecourse, he is retiring sound from racing after 58 wins and a very commendable 6th in the Foxhunters at Aintree last year, he was the oldest jockey in the race and there was a lot of media interest in him. It was a great party and good to catch up with the point to point crowd.

We have been busy getting things organised for the Open Day on the 28th, all horses are going to have front shoes on so they can be paraded. They are looking somewhat portly at the moment, but at least we have got something to work on.

The riot news is dying down now - the papers have been full of mug shots of looters that have been caught on CCTV and the public have been great at helping police with their enquiries. The courts have been working 24 hours a day and the sentences have been really heavy - even people that were not directly involved but received stolen goods have been put in prison. Quite rightly so.

In Libya, Tripoli was supposedly taken over by rebels this morning -it all seemed too easy and I can't help think that Colonel Gaddafi has something up his sleeve and wont give in that easily. The Rebel army just look so incredibly disorganised and chaotic but lets hope that behind the scenes there is some order, otherwise there will be so much more bloodshed in the aftermath.

I cycled to the post box in the village this afternoon with the three panting dogs in tow. A lot of the villagers were out making the most of the late summer sun, and all in very good spirits. I cycled back along the river -it is such a lovely place to live, we are so terribly lucky to live here and I hope we never take it for granted.