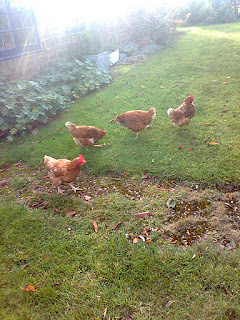 I am picking up some more ex-battery chooks today -
we have got four left from last year, which will have to be kept separate from the new chooks as they may fight. They have had their beaks put out of joint because they have to sleep in the stable, (instead of their penthouse suite hen house) for a few days until the new one's get stronger. I know I am a bit sad, but I just love watching those poor bedraggled chooks, who have never seen the sun, grass or worms before, learning to use their natural instincts again, which surprisingly, they have still got. Seeing them scratch soil (not so good when they get into my garden!) run, and sunbathe for the first time is just wonderful. Doug thinks it's hilarious and thinks that I should be knitting little coats for them as they may get cold, as they will be fairly bald when they arrive - the worrying thing is that I even half considered it - If only I could knit....
Doug's father is still much the same. We can only hope that he is more comfortable and no longer in pain.
The whip debate continues. I watched Morning Line (Ch 4) today and have to say that I thought it was rather one sided. They had Nick (Lord Snooty) at a race meeting, interviewing a little flat jockey, who was saying that the whip didn't hurt at all. He was then asked to hit a punter on the hand 'as hard as he could' - he then literally tapped the man's hand so softly that it was laughable, the man said 'it didn't really hurt' - that was the strength of their argument and it was quite frankly a joke. The bottom line is that the whip does hurt if used hard enough and should only be used when necessary. Many jockeys continuously broke the whip rules that were there before so a new system had to be put in place. They agreed to the new system but then started to squeal when they knew how much it was going to hurt their pockets and threatened to go on strike. The BHA then had to revise the rules which have just been released. The new rule still has the maximum amount of times you can hit a horse in a race as 7 on the flat and 8 in a jumps race but now this is spread through the whole race and not just counted after the last furlong. This morning the chairman of the PJA (Professional Jockeys Association) said that the jockeys agree with these new rules but do not agree with the penalties - This just makes me shake my head in disbelief - If the penalties are not harsh then certain jockeys will continue to infringe with no thought of the integrity of the sport - as they did before. The obvious answer is learn to count and don't get penalised in the first place.
Anyway, I will step off my soap box and on to far more important things - I'm off to pick up my chooks!!