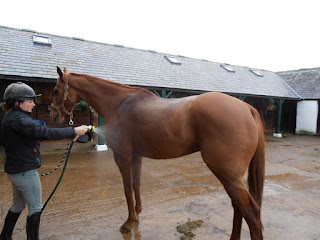 We have now got a hot water wash for the horses which is rather a luxury - Aitch, who used to hate the hose pipe rather enjoys his hot bath after work now.
Doug is away in Australia at his fathers funeral, although I would love to have gone too I am just so pleased that I saw him in July when he was relatively well and we had a very special time with him.
The horses have been working really well - we have started putting them up the all weather now and are really pleased with how easily they are going up, which means the preliminary work we have been doing has been spot on.
Frog will probably be the first one to run at cottenham on the 27th November - we are toying with running Doris in the two and a half maiden there as well, but we will have to think about that - the problem with cottenham is that it is a very flat fast track and although Doris seems to have the pace, it is probably a lot to ask for her to jump around there at such speed or her first time over fences - we will be schooling her this week so we will have some idea how her jumping is and go from there. Aitch (novice riders or Ladies) and Moonie (mares maiden) are hopefully running at Barbury Castle on the 4th December, with Amy having her first ride on Aitch. Harry may also go there in the intermediate. Jake (Doctor Kingsley) will be going to his favourite track, Whitfield on the 18th December also in the intermediate and Laverty who won his maiden there will be going in the restricted. Leon will be doing a lot of schooling and depending on how he gets on will go to Cottenham in December. Shade and Oaka are only just doing fast work and will need a little more time before we decide where they are going, Whisper has also got to do a bit of schooling before we decide and Paddy who needs soft ground will be going wherever the ground suits him the most. Dolly is still in work and will probably run in a bumper, Eeyore and Subo have been roughed off as they are still maturing, and Cloud is roughed off at the moment but may be bought back in after Christmas to race at the end of the season on her preferred firmer ground.
Posted by Pauline at 10:57