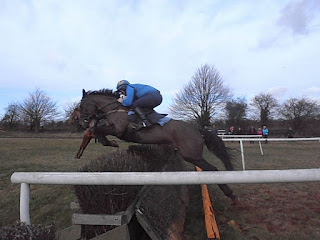 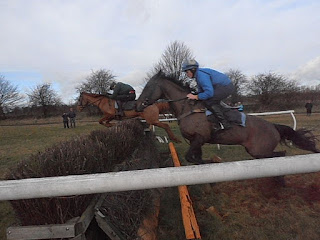 Charlie Poste very kindly came over this morning to help with the schooling - we had booked him a few days ago but then he won the Welsh National yesterday on Le Beau Bai and we assumed he would have better things to do than visit a little yard like ourselves - so we were highly honoured and him and Will did a great job of schooling Doris and Frog who are supposed to be running on Saturday at Cottenham. Charlie thought that Doris schooled really well and if Will can get her settled in the race and over the first few fences then she should give him a good spin. Amy also had a pop on Aitch who was foot perfect, he will be running only if we have some rain as his legs are a little fragile and he could do with some more cut in the ground.
After the schooling session we all retired to the shepherds hut and cracked open a bottle of champagne to celebrate his win - it is the biggest of his career and much deserved as he is a very talented horseman. Funnily enough we also know the owner of the horse, Dr Darian Lott, who is terribly excited about the whole thing and wants us to help celebrate his win as well - we saw him run at Cheltenham last season and couldn't believe how tiny he was, barely 15.2 hands, and cost very little, so it is rather a fairy story and definitely worth celebrating!
Cloudy Moon has come out of her race incredibly well - She has eaten up and is full of beans. We will have to look for another race for her, sooner rather than later as she is bursting with energy.
Posted by Pauline at 09:41