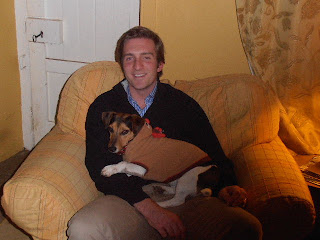 Family on Christmas Day and Joseph with Geoffrey on Boxing Day 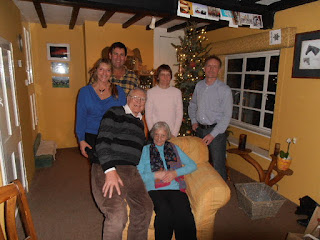 Christmas Day went really well, even though we got our timing slightly wrong with lunch and missed the Queens Speech by 20 minutes, it didn't seem to matter much as Dad had already seen part of it on the news ("Just not the same - it always used to be a secret until the day") Boxing Day was very relaxing - after doing the horses we ended up watching Kempton races on the TV rather than going there in the flesh, and it was something else watching Kauto Star winning his 5th King George - What a horse, and it would have been great to have been there, but we saw him watch the fourth and never thought he would go better than that. Hats off to him and connections. Ultimate respect.

Joseph and Sophie came around in the evening for a meal, and it was lovely to catch up with them. Sophie is about 7 weeks away from giving birth but it looks as though it may be sooner than that as she looks quite forward. They are very excited about it - just hope they feel the same after the little darling has been born!!

Today we ran Cloudy Moon at Chaddesley Corbett (Harry kept her company - bless him) - It was important for her to get a nice run after her fall last time. Will couldn't ride her as he is still slightly injured so we had Ben Poste (Charlie Poste's brother, who has just won the Welsh National) There was 17 runners in the race and we were delighted with the ride Ben gave her - He kept her in mid division, on the outside so that she could see every fence. She managed to avoid the inevitable carnage that you are bound to get with 17 maidens, was settled in very nicely and came a good 7th. Ben rode her beautifully and was really pleased with her and thinks that she will run a big race next time. John and Sally (her owners) couldn't believe that it was the same horse as she seemed so grown up and workmanlike - very pleasing.

We have just got back with Laura, who was helping us, and found that Becky and Lucy have very kindly got the other horses in from the field and fed them. Really good of them as after a long day at the races the last thing you feel like doing is trudging up and down in the mud bringing 14 horses in from the field. Thanks girls!
Posted by Pauline at 09:39