Jake WINNING!!! and Laverty in the paddock 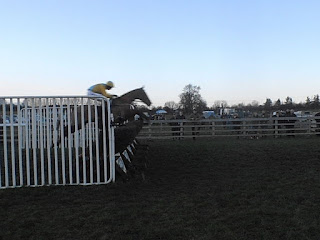 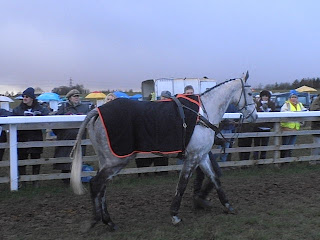 A great day at the races - Laverty started the ball rolling with a very good run - he came 5th/6th out of 14 and it was a seriously hot, fast race where we had him right out the back, assuming in the testing conditions that the front runners would come back to him, but they just kept galloping, which left Laverty a bit too much to do, but he still ran a great race bearing in mind that he hadn't run for two years and he doesn't like sticky ground. He will have come on enormously from the race and will be a horse to have some fun with later on.
Jake was the next to go - He looked less than enthusiastic for the first lap, when he was behind the main field. but then Will urged him up to the front where he completely changed character and took the bit and flew - he was challenged by the hot favourite two from home and went into second, at this point we were all thinking that we would be delighted if he holds his place and came second, but then he went up another gear, took the next fence upsides and then won by five lengths. We were over the moon - he has now qualified to run at the Cheltenham Intermediate final in May, Happy days!
Harry was the next to go and was so chilled out that he was almost comatose - he has got so used to being taken to the races as company for the other horses that he didn't seem to realise that today he was actually supposed to be racing - having said that, we knew that out of all our horses he was the least fit, so when Will pulled him up having done a circuit and a half and he was still intact and hadn't fallen (as he normally does) we were more than happy. Three horses home in one piece and a winner AND best turned out TWICE (the girls would be upset if I didn't mention this!) You really couldn't want more than that.
We are off to celebrate....
Posted by Pauline at 10:45